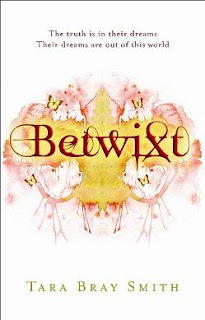 Beautiful Morgan D'Amici wakes in her trailerpark home with dirt and blood under her fingernails. Paintings come alive under Ondine Mason's violet-eyed gaze. Haunted runaway Nix Saint-Michael sees halos of light around people about to die. At a secret summer rave, the three teenagers learn of their true, changeling nature and their uncertain, intertwined destinies.

Betwixt is one of those rare teen YA novels, like Holly Black's Tithe and Cassandra Clare's City of Bones, that make you feel a little twitchy between the shoulderblades. There is a sense of unease and danger throughout the novel and its a slow burner written in a style that somehow manages to be both gritty and lyrical. The author turns her unflinching scrutiny on the three main characters of the novel, detailing their lives and highlighting, without much fanfare, the differences between how they see themselves (as different, special, odd) and how the outside world perceives them. They are not necessarily likeable characters, not by a long shot, but they are true to themselves. Ms. Bray Smith has a deft hand running the gamut of their emotions and I thought that Morgan's character was particularly well defined. She is truly a reflection of Morgana - beautiful, alluring, scheming and determined to have things her way.

Nix struggles with his visions and you immediately feel empathy for him but you also want to shake him and shout: tell someone about it, they'll believe you! but naturally this is where his conflict lies and this conflict is what drives and motivates him to take the actions he does.

Ondine, as the artist, is someone you would love to hate. She seems to have it all, talent, looks, wealthy parents...but the author is clever enough to give Ondine her hang-ups and it deflects your pangs of dislike to feelings of pity as she tries to make sense of what is happening in her life - she's a bit weird in that her paintings come to life...then she has to deal with completing her final year on her own whilst her parents and little brother move all the way across the country. Again, her internal conflict drives her motivations very well and I was keen to see how the story ends for all three the characters, especially once their true natures are revealed at the party (mentioned in the Synopsis).

The story is involved with twists and turns and would film beautifully. If you are a fan of books by authors like Jane Yolen, Midori Snyder, Holly Black and Cassandra Clare, you will no doubt like Betwixt.

You can find Tara Bray Smith's site here with the Betwixt wordpress page here.
Who wrote this? Liz at 2:54 pm