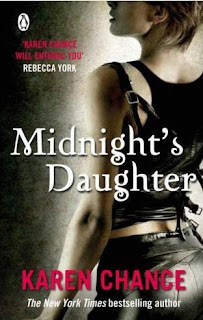 Synopsis:
Dorina Basarab is a dhampir, the daughter of a vampire and a human woman. Subject to uncontrollable rages, most dhampirs are born barking mad and live very short, very violent lives. So for five hundred years, Dory has been fighting to maintain her sanity by unleashing her homicidal tendencies on those demons and vampires who deserve killing. But now Dory's vampire father has come back into her life. Her uncle Dracula, notorious even among vampires for his cruelty and murderous ways, has escaped from prison, and her father wants Dory to work with the gorgeous vampire dueling champion Louis-Cesare to put him back there. Vampires and dhampirs are mortal enemies, and Dory prefers to work alone. But Dracula is the only thing on earth that truly scares her, and when Dory has to go up against him, she'll take all the help she can get...
I have not read any of Ms. Chance’s books in the past, not due to anything else but the fact that the tottering TBR pile of books that were there before. However, Penguin UK took pity on me when I spotted this newest offering in their PR sheets and sent me a copy of Midnight’s Daughter to read and review and I have to say: I am thrilled that they did.
Karen Chance knows how to spin a pretty involved story with an amusing, wry and flamboyant main character. I gather from talking to some friends, that the story takes place in a world which the author already created in her Cassie Palmer books, with some characters from that series appearing in this one.
To be honest, I’m pretty sure that the previous books do not need to be required reading to enjoy Midnight’s Daughter. You get caught up pretty quickly with the main elements, the various characters and then the story just exploded – literally – with nonstop action and well written sequences that will make John Woo want to pick up the rights for a script.
Dory’s character as dhampir is handled and explained satisfactorily, she is given a range of emotions to explore within the novel and what makes it work is the fact that you can see her motivations. In fact, you realise that there are ripples to these motivations which stretch further than you might expect. Even her father, Mircea’s reasons for roping her in to sort out old dear Uncle Drac’s behaviour, is hinted at and then explored.
One thing is very clear throughout the book – Karen Chance knows how to write. Not just the action scenes, or having the butt-kicking heroine throw out pithy one-liners but the set-up is clever, the involvement of the various factions in the simmering war is well thought-out as are the repercussions to the various actions characters take in the book.
You can find Karen’s website here, with Penguin’s site here.
Who wrote this? Liz at 10:10 am