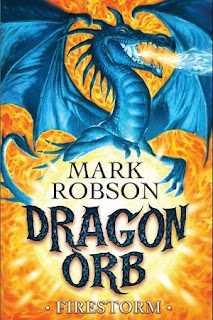 Four dragonriders on a mission to save their world. Dragon’s in Areth each have a single predestined rider and a single life mission, given to them by the Oracle. But this once all-powerful being is now fatally damaged and fading fast…Only the dragons and their riders can save it!

Don't you love it when slender books really give you a strong talking-to, unexpectedly? Developing characters with issues, unexpectedly? Turning from what might have been mundane into something pretty cool?

Yep, me too. Which is why I was really chuffed with this offering from Mark Robson. The novel starts off a bit self-consciously, with the first character Elian meeting his destined dragon, Aurora. Through Elian and Aurora we learn quite a bit about the dragonriders and their dragons. Through the eyes of the villagers we realise the majesty of the dragon and how a young boy can be changed from being a normal boy to a dragonrider, someone of legend. The author's storytelling evens out pretty quickly and you get the sense he becomes comfortable with the story he's just introduced.

What I appreciated is how little Elian knew about being a dragon rider. They are only mentioned in passing in his village, in order not to give young people cause to dream too high. Once Elian and Aurora set off to the Oracle the real adventure starts. They meet up with a young tribeswoman, Kira with her dragon, Longfang who in turn is also on her way to the Oracle to receive her mission and purpose. Nolita, the third member of the foursome was the biggest surprise. She is terrified of large creatures and the first sight of her dragon, Firestorm, sets her running. Fast. Away from her family and village. She runs for her life, too terrified to see straight. Her fears and her obsessive compulsive behaviour is what sets her apart from the two young dragonriders whom we already met, who have embraced their destiny.

The story spins along at a good pace with adventures along the way. The three form a bond, learn to work as a team. Once at the Oracle the fourth member of the foursome, Pell, rider of Whispering Shadow, makes his appearance. He is not a pleasant chap and makes life a bit more difficult for everyone.

And that's all I'm about to say about the story itself as spoilers would be mean and nasty. That's why you have to go and buy the book and the series! You can find out more about the rest of the series here, at the author's website.
Who wrote this? Liz at 4:46 pm