The Sons of Heaven, Terrence Strong 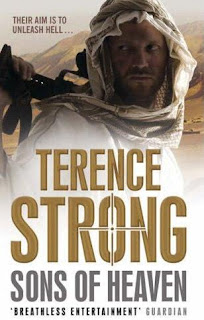 They are the Pessarane Behesht. Sons of Heaven. The secret sword of Islam. Spawned in war-torn Beirut from the seeds of legend. Nurtured in revolutionary Iran to wreak vengeance on the enemies of Allah. When the freighter Clarion Call disappears mysteriously in the Gulf, she is carrying a secret consignment of French arms for the Pessarane Behesht in return for the release of a hostage diplomat. Ex-SAS Major Robert D'Arcy, whose international security firm was protecting the ship, finds himself embroiled in a deadly battle of wills between the state-sponsored terrorists and rival Western intelligence agencies with conflicting interests. As the Iranians resort to kidnap and assassination in their thirst for revenge, and the lives of an innocent woman and her child are held in the balance, D'Arcy must act alone to prevent more bloodshed.

I found this book to be an incredibly fast and furious read. The main character D'Arcy is very much his own man, damaged and liable to hurt someone quite badly, but only after careful consideration. He is a strong alpha character with a strict moral code which he expects others to abide by. He is therefore completely taken aback by the attack on one of his clients, and in turn, a further attack on this same client's family.

He throws himself into the fray, doing his best to find out the truth and cuts a swathe through political machinations and wild plots by extremists which are, when considered, incredibly detailed and scary.

The book is worth a read if you are fans of the JB books, be they Jason Bourne or James Bond. In fact, the writing is way more Jason Bourne, right down to the ruthlessness and the single vision.

Terrence Strong writes well, with a tremendous ease that makes you thank your lucky stars that he's not decided to turn into the enemy because if he can come up with diabolical plots like in The Sons of Heaven, you just know the world will be in a millenium of trouble.

The fact that the book is set so strongly in what is currently happening in the world - the insane fears of the West, the constant lurking presence of terrorism which turns everyone into suspects...the heartbreaking kidnapping that occurs for political reasons be it in the East or the West, using innocents as pawns in a ongoing war, is what makes The Sons of Heaven work.

The story is strung along at a steady pace and the set pieces are well planned, like a good movie. The action does not let up and it leads you through the murky world of shady armsdealers and people who should be on your side...but who act only for their own good.

A really good read - if you like your action men tough and flawed, you will love D'Arcy. He ranks highly alongside Ben Hope from Scott Mariani's books. If you have read any Gerald Seymour, Chris Ryan, Stephen Leather, Jack Higgins etc. you will find a new companion in Mr. Strong's books.
Who wrote this? Liz at 10:15 am