The Exodus Quest by Will Adams 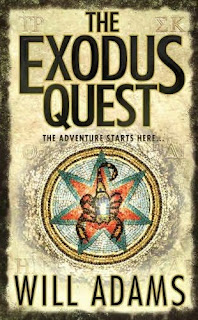 Synopsis
With returning enigmatic hero Daniel Knox, The Exodus Quest brings the legends of the Dead Sea Scrolls brilliantly to life. Has the sacred Copper Scroll been found, and will it unearthing cause more danger and death for our enigmatic hero?

On a dusty Alexandrian street, Egyptologist Daniel Knox comes across a Dead Sea Scroll jar that puts him on the trail of an ancient Jewish sect. But blood-and-thunder preacher Ernest Peterson has a sacred mission to complete, and he’s not about to let Knox or anyone else get in his way.

Then Knox’s partner Gaille Bonnard is abducted, and a hostage tape on TV threatens her with execution. Certain she’s hidden a message in the broadcast, and with time running out, Knox races across Egypt to the mysterious ancient city of Amarna and the tomb of a heretic pharaoh that may provide the answer to the great riddle of the Exodus itself.

Author Will Adams has sent out another invitation to get on a rollercoaster ride with him through antiquity. Daniel Knox whom we’ve met in the previous outing – see The Alexander Cipher – makes his re-appearance only slightly dented by his previous escapades. He’s maybe a bit wiser in his outlook and definitely has a nose for trouble. And he does manage to stir up a great deal of trouble, because frankly, that’s what he’s good at and Will Adams clearly enjoys throwing his hero into very difficult situations.
Yes, this is a quest novel, (my favourite type!), and like David Gibbins’ The Last Gospel, it is a wild spice mix of ancient history, biblical fact and fiction, myth and educated guesswork all rolled into an attractive package and presented for your delectation.
Daniel’s character is that of an intelligent scholar who clearly enjoys what he does, even when he gets into all kinds of mischief because of where his reasonings lead him. His enthusiasm shows in his conversations with the other characters in the novel and it is through these that the background to the story is relayed. His friends in the novel remain true and loyal throughout and I think that they were crafted very well to reflect the many aspects of Daniel Cox’s own character. The only item I would have liked a bit more news on is the aftermath of what he discovered in The Alexander Cipher. Having said that, I think that the author probably decided to not harp on about the previous events too much, allowing this book to be its own story. There are a few suggestions and nudges in dialogue between characters, but it is subtle.
Gaille’s character is one I see the author expanding. Gaille is still very much a conflicted person and it shows in her distrust of others. She sees Daniel Knox as one of the few people in the world she can trust and although she is drawn to him, she is also keen to distance herself from him because she is a strong, intelligent and independent person. I like Gaille and think there is good scope to help her grow in the future novels. This is me assuming there will be future novels! There has to be. I need my Daniel Knox fix!
The novel is intricately plotted with a strong storyline. It is a speeding train of a book, only marginally slowing down towards the conclusion. Will Adams has definitely put his best foot forward in this, his second outing. His writing has become even better than in The Alexander Cipher (which I cannot believe I did not review after I had read it – watch this space!) which in itself is a feat. I am loathe to make comparisons but I will be honest here when I say that Will Adams ranks high in my books, beside the giants in this genre of adventure which include Steve Berry, David Gibbins, Matthew Reilly and Tom Martin. The Exodus Quest is a luxurious heart-pumping adrenalin ride of a book by an author that just keeps getting better. If you are interested in biblical history, treasure, adventure in wild places, you will not be disappointed.
About the author:
Will Adams spent over two months in Egypt as part of his research for The Exodus Quest. Previous professions have included shop salesman, painter and decorator, microfiche technician before joining a firm of business history consultants where he wrote a number of corporate histories and biographies. He later worked as a communications consultant before resigning and selling his flat to try to fulfil his lifelong ambition of becoming a novelist.

The Exodus Quest - publication date 3rd November - available in bookshops and online.
Who wrote this? Liz at 2:04 pm

Email ThisBlogThis!Share to TwitterShare to FacebookShare to Pinterest
Labels: harper collins, will adams