The Keeper of Secrets, Judith Cutler 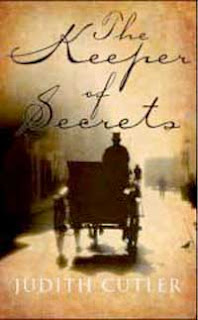 England, 1810: Young Parson Tobias Campion is excited and nervous to be starting at the small parish of Moreton Priory. But his first night in the village brings excitement of the wrong kind when he has to intervene in the attempted rape of housemaid Lizzie Woodman. Even in the normal course of events life in the village is far from quiet, as soon Tobias has to deal with both violent and suspicious deaths which put his character and ministry to the test. But matters come to a head when Lizzie disappears from her employers. What has become of the girl and who is responsible? As Tobias searches for answers they find themselves delving into the dark secrets that haunt Lizzie's past.

I freely admit that I regret not having read any of Judith Cutler's books in the past. I received a copy of The Keeper of Secrets in the post a little while ago from Alison and Busby and decided to settle into it this Saturday past, whilst Mark was out fishing.

And I read it in one sitting, only breaking for lunch, but then trying to read it whilst wolfing down a toasted sarnie in one hand, with the book gripped in the other.

The author writes fluidly, introducing us to a very young, almost naive main character, Tobias Campion, as he takes up his role as Parson in a small unfashionable village. I loved the style of writing. It had echoes of Georgette Heyer but it never becomes too precious and Tobias' character forms the strong moral backbone of the story. Through his eyes we see the poverty of the villagers and he realises, coming from a very well to do family himself, how difficult the lives of servants and peasants are.

He teams up with the local doctor, Dr. Hansard, and together they try and sift through the layers of lies and deception surrounding the various incidents which shake up the parish and villagers.

The novel is well-written and worthy of a re-read. The characterisation is strong with a plethora of males which dominate the book. The women who do form the pivotal characters in the book are fantastically rendered and provide the nobility and gentleness required to soften the brutality and shock of the storyline.

I would heartily recommend The Keeper of Secrets as change of pace. Do not be fooled into thinking it is a cosy little crime / mystery novel. It deals with unpleasantness in an adept way and comments on the social mores of a time not so very different to ours.

Judith Cutler's site can be found here with some interesting reading about her various other books, including TKOS.