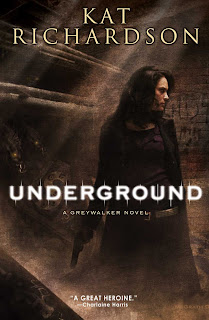 I found a note of this article over at Kat's LJ site and decided to post it here, for inspirational purposes. I think sometimes that authors overlook what is right under their noses and find the way she came up with the ideas that work through Underground brilliant.

Fantasy author Kat Richardson told SCI FI Wire that her new novel, Underground, grew out of her desire to write a "monster in the sewer" book.

"There's just no setting as perfect for a tale of ghosts and monsters eating unsuspecting people than a condemned and abandoned city hidden under the streets," Richardson said in an interview. "So I took my monster out of the sewer and let it run amok in the crumbling streets of buried Seattle. It was ridiculous amounts of fun to write."

In the book, something is eating homeless people in Seattle's Pioneer Square and leaving the gnawed remains lying in and around the underground city.

"Harper Blaine's friend Quinton fears he'll be associated with the deaths, so he convinces her to look into the situation, and they soon discover that they're up against a creature straight out of local Indian legends--and it's really hungry," Richardson said. "They'll have to get a lot of help from their friends as well as the local Indians to put a stop to the monster and its master before it makes them the next item on the menu.

"Underground is based largely in the history of Seattle's downtown and the legends of local Native American groups. "Both of which are topics that have often been ignored or marginalized," Richardson said.

"Through the Seattle Public Library, I discovered a book of local Indian legends collected and translated by a Seattle settler named J.G. Ballard and several books on the redevelopment of Pioneer Square after the Seattle fire of 1897, which was the cause of the underground city.

Online newspaper sources connected me to some examples of spoken Lushootseed--the language of the local Indian tribes--and information on the distribution of the language and people throughout the Pacific Northwest."

The head historian at the Seattle Underground Tour was another terrific source of information and a wonderful storyteller himself, Richardson said. "I also spent a lot of time walking around, looking at the historic district--and under it--and asking really strange questions of people who were mostly very gracious about answering them," she said. "I'm a sucker for weird tales from history, and the book required a lot of digging in that field, which was fascinating and fun." --

I don't want to bug, but, speaking of Kat Richardson, I still don't have my book. :(