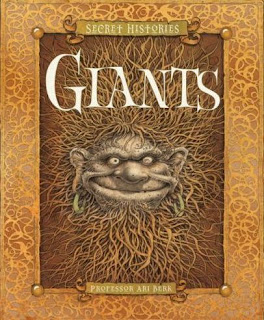 The first title in this eagerly-awaited series, Giants reveals the natural history of this secret race, presented by the Order of the Golden Quills, an ancient collective of various species (elves, dwarves, fairies etc).

Invited to join the order, readers are privy to the fascinating world of giants, including the mysteries of what a giants keeps in his sack; giant costume and clothing; the life cycle of giants and the mind-boggling evidence of giants that can be found today in landscape features around the world (Cerne Abbas hillside giant, Giant's Causeway, stone circles). Meet the world's most famous giants, including Goliath, Gogmagog and the 9'3"Child of Hale. A fascinating and beautifully presented volume, not to be missed!

I was over the moon when Ari Berk friended me on LJ (preens a bit) and then I spotted that his newest book, Secret Histories: Giants had been published. And I had to have it. Who cares about Beedle the Bard, right?

The Secret Histories: Giants, published by Templar Publishing here in the UK is packed with beautiful illustrations by a set of well known artists and illustrators. The artwork is gorgeous and thoughtful. The book is packed with information about giants, from all around the world, including their traditions, history and how they relate to the humans and the other fey creatures that inhabit the planet.

The pages are double-thick which means that it gives a feeling of luxury to the book - there are small flip-up notes on many of these, to relate interesting snippets of information about what is being discussed on that page specifically. Professor Berk is current acting Magister and Scribe of the Order of the Golden Quills and the books is written with the eye on it being an anthropological study of a very shy race which has existed side-by-side with humans since humans first appeared.

At the centre of the book a gatefold reveals a Zoologica Giganticum which presents some other giant creatures of the world from myth and legend. The rest of the book abounds with recipes, menus, rules for games played by giants and my favourite bit, a reworking of the telling of Jack and the Beanstalk, from the perspective of the giants.

Secret Histories: Giants is a treasure trove of a book and ranks right up there with the Runes of Elfland for its beauty and cross-over appeal to both adults and children. A must-have for those of us who have a vested interest in mythology and legends.

About the author: (culled from Mythic Journeys)

Ari Berk is a writer, visual artist, and scholar of literature, history, iconography, and comparative myth. His publications have included academic studies on myth and ancient cultures, as well as popular works on myth for both children and adults. He is the author of The Runes of Elfland and Goblins!, two books created with artist Brian Froud.

Deeply dedicated to an interdisciplinary approach to teaching, research and writing, Dr. Berk holds degrees in Ancient History and American Indian Studies, as well as a Ph.D. in Comparative Literature and Culture. He has studied at Oxford University in England, and has traveled widely, making friends in many parts of the world. In the last decade, his work took him to the University of Arizona in Tucson where he taught courses and lectured in the areas of Early Modern Ethnography and Literature, Mythology, and American Indian Literature, History, and Culture. He was appointed to the committee that developed the first American Indian Studies doctoral program in the United States, and worked as the assistant to the Pulitzer Prize winning Kiowa author N. Scott Momaday. He is now a professor in the English department at Central Michigan University, where he teaches Mythology, Folklore, and American Indian Literature.

He was also one of the contributors to the Endicott Mythic Studio website which has sadly closed down. The site is still there in its entirety and a must for anyone interested in myths, legends, retellings of fairy tales and some fantastic artwork and poetry.
Who wrote this? Liz at 10:34 am