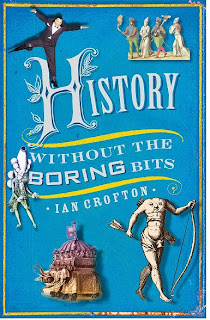 The usual history books focus on the reigns of kings and queens, the dates of important battles, treaties, things like that. And we are quite happy to learn them and get on with having to study what our teachers and lecturers try and make impossibly bland.

But there are other more interesting stories to tell - stories that don't usually get into the history books, but which can nevertheless bring the past vividly and excitingly to life.

Imagine a history lesson that spares you the details of such seminal events as the 11th-century papal-imperial conflict, that fails to say much at all about the 1815 Congress of Vienna - and that neglects entirely to mention the world-changing moment that was the 1521 Diet of Worms. Imagine instead a book that tells you the date of the ancient Roman law that made it legal to break wind at banquets; the name of the defunct medieval pope whose putrefying corpse was subjected to the humiliation of a trial before a court of law; the identity of the priapic monarch who sired more bastards than any other king in England; and last but not least the date of the demise in London of the first goat to have circumnavigated the globe twice. Imagine a book crammed with such deliciously disposable information, and you have History without the Boring Bits.

The author of History Without The Boring Bits has clearly not just done a tremendous amount of research whilst putting this book together but he also probably had a lot of fun. And he excells in having found some of the most random and bizarre bits of information which is placed in the book in chronological order.

331 BC
Guided by Crows.
According to the contemporary historian Callisthenes of Olynthus, Alexander's army was guided through a desert by a flock of crows. The birds would fly ahead as the men followed them, or wait for them if they tarried. Even at night the crows called out to show the way.

The snippets of history are all concise and headlined by fun titles such as: Pelican devours pigeon, Monster awarded protected status, The lake of death...

A very interesting read, even for people who profess not to like history. Ian Crofton's other books include The Kings and Queens of England and Brewer's Britain and Ireland.
Who wrote this? Liz at 6:03 pm