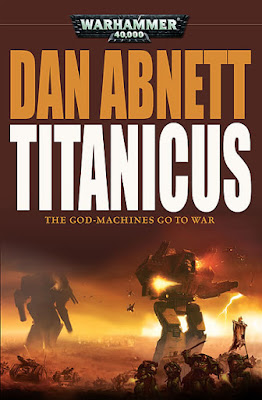 "When the vital forge world of Orestes comes under attack by a legion of Chaos Titans, the planet is forced to appeal for help. Titan Legio Invicta, although fresh from combat and in desperate need of refit and repair, responds, committing its own force of war engines to the battle. As the god–machines stride to war, the world trembles, for the devastation they unleash could destroy the very world they have pledged to save."

Titans- 250ft tall metal gods of neural linked firepower duelling across kilometres of torn countryside, unloading carnage on an epic scale and smashing through cityscapes in the hunt for their adversaries with an ease that makes Godzilla look like an escaped parakeet.

The war for Orestes is seen from the perspective of various characters, whose storylines are interwoven throughout. Political intrigue, religious schisms, personal tragedy and simmering heroism all get a showing, and while all I really wanted to do was keep plunging back into the screaming action, it all comes together quite satisfyingly, delivering a healthy dose of the 41st millennium.

Dan has imbued the art of waging war with these armoured behemoths with a vivid and brutal energy, infusing the action with a palpable sense of tension that belies the seeming indestructibility of the machines.


You can sample an extract here.
Who wrote this? Mark at 8:53 pm