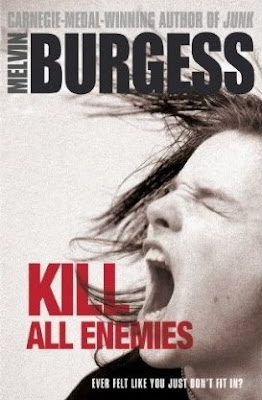 We are so proud to be part of Melvin Burgess's blog tour to promote his powerful and thoughtprovoking novel: Kill All Enemies.  In today's blog, Melvin takes time to talk to us about Chris, one of the characters from the novel, and the boy that formed the inspiration for that character.
Chris

The thing about the lad I used as the basis for Chris was, he just wouldn’t do enough work. It was fine when he was in the early years at High School, because you can get by then on native intelligence. He was a clever boy and still round near the top of the class at that time. It was as the years went by that things got sticky. He’d be given more and more homework, he wasn’t doing any of it and falling more and more behind. It was driving his teachers crazy - particularly as the exams got close.

Of course, we all want our child to do well, both teacher and parents. Over the years, the measures to make him get on with it got harder and harder, and his parents and teachers became increasingly frustrated.

That could be the story of a lot of kids. What made Chris different was the degree to which he stuck to his guns. He simply refused to be in the wrong. Detention? – wouldn’t turn up. When they isolated him – put him in a classroom on his own with a teacher while he got on with his work - he’d simply wait until the teacher’s back was turned, or until they had to go out of the class for a few minutes, and climb out the window. The same at home. His parents tried it as well – locked him in his room until the work was done. Same thing – out the window, gone. Everyone was getting angrier and angrier. Eventually, when things got too hot, he simply disappeared from home.

This sounds like a serious thing, but he hadn’t actually left the area at all. In fact, he was actually going to school. Still not doing the work, mind you – but going. He was eating at friends, sleeping at friends. Perhaps anxious that he he’d really leave altogether if they got to stern abut, his parents went along with it for a while, hoped he’d come round; he didn’t. Later on, when they got in touch with his friends and friend’s parents to try to stop him, he accordingly went a step further as well, and went camping. Amazingly, he put up his tent on the school grounds, where no one ever thought of looking for him.

I mean - how bad is that? Or … should it really be, how cool is that? After all, we’re all forever complaining and worrying about the amount of stress we have to put up with at work, and most parents are aware that the same thing is happening at school. The work life balance has been getting worse for years, and it shows no sign of getting any better. Isn’t it nice to come across someone who is just not putting up with it?

In no other part of his life was misbehaving. It was just the work. School was school – home time was his time; that was all there was to it. No one and nothing was going to make him keep up with that homework.

Chris was obviously someone who had real character and who knew his mind and I was fascinated by his refusal to get sucked into the school workload. I sympathised with his parents, of course – but at the same time I admired him for making a stand.

There are a number of stories for Chris’s real life that I used in the book. Getting dressed up in crazy gear, prancing into the classroom room and lodging himself under the teachers table as a protest was one - although not for the reasons I put in the book. His mum told me that one. Oddly, when I spoke to Chris, he remembered very little of many of the events she told me - an interesting thing about perception. He gave me the basis for the story of snailboy though, which I used.

Things got quite hairy as the exams got close. His mum got fed up with the fight and suggested to the teachers that things had gone too far. Chris, she suggested, had the right to fail if he wanted.

“Yes, he has the right to fail – but not on my watch,” one of them said. No surrender! But Chris got his way in the end, and they cut down on the exams and just concentrated on a few of them. When he left, he got a job in a bar and within a very short time was managing it. Not a lazy person then, or a stupid one, or an irresponsible one – just one who wasn’t going to do the work.

He was an immediate candidate to pick up and spin into a character for the book. I loved his attitude, his stubbornness, and the fact that, since he managed himself so well as soon as he was out of school, it was plainly the school that was failing, not him at all.

The character that developed on the pages in KAE turned out great – full of humour, strong willed and determined. Somehow, though, I found it hard to reconcile that character with someone who would get into so much trouble just by avoiding.

I looked through my notes and I found a clue from when I had talked to Chris, that I might be able to use. I remembered how he told me that he still hated writing stuff. He was writing an email to someone just recently, he said, and he still hated doing it.

It was the writing.

In the book, you can find the spin I put on that for my character. Whether it’s true of the original Chris or not, I have no idea …

Thank you for this fascinating post. I was completely taken with the character of Chris in this book, and I could really see his point of view.