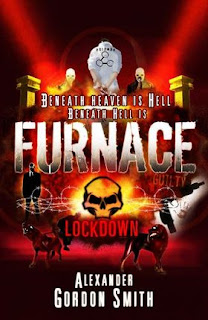 Beneath heaven is hell.
Beneath hell is Furnace.

Furnace Penitentiary. The world’s most secure prison for young offenders, buried a mile beneath the earth’s surface. One way in, no way out. Once you’re here, you’re here until you die, and for most of the inmates that doesn’t take long - not with the sadistic guards and the bloodthirsty gangs. Convicted of a murder he didn’t commit, sentenced to life without parole, 'new fish' Alex Sawyer knows he has two choices: find a way out, or resign himself to a death behind bars, in the darkness at the bottom of the world.

Only in Furnace, death is the least of his worries. Soon Alex discovers that the prison is a place of pure evil, where creatures in gas masks stalk the corridors at night, where giants in black suits drag screaming inmates into the shadows, where deformed beasts can be heard howling from the blood drenched tunnels below. And behind everything is the mysterious, all-powerful warden, a man as cruel and as dangerous as the devil himself, whose unthinkable acts have consequences that stretch far beyond the walls of the prison.

Together with a bunch of inmates - some innocent kids who have been framed, others cold-blooded killers - Alex plans the prison break to end all prison breaks. But as he starts to uncover the truth about Furnace’s deeper, darker purpose, Alex’s actions grow ever more dangerous, and he must risk everything to expose this nightmare that's hidden from the eyes of the world.

Here are my thoughts: Buy Furnace: Lockdown by Alexander Gordon Smith right now - put it on order on Amazon, nag your parents, nag your partner, and just buy it! It is that much of a roller coaster of a read full of action, a wronged hero (who in turn is not entirely innocent but he is likable), it is well told, it has engaging characters, an incredible and awful situation, a hellish location, complete with gang fights, lockdowns, a diabolic jail, a warden dug up from the bowels of hell, and an escape plan to rival The Shawshank Redemption.

There is so much that is brilliant about Furnace. The author, Alexander Gordon Smith, has clearly got a very devious and twisted little mind which he uses to great effect, messing up his main character's life. Alex is one of the bullies at school, he also breaks into houses when the owners are out, so he's pretty much a nasty piece of work, not entirely someone you would want to read about. But here, lies the genius of the author - Alex's character has more redeeming qualities than you would give him credit for and once you realise how much trouble he's in, you forget about the fact that he's not entirely the nicest kid on the block and you get behind him. Alex's voice is fresh and strong - there is no swagger, there is no posturing - he is just a kid who made a few stupid choices and because of that, he gets sent to the Furnace.

The Furnace as the setting is excellent. There is plenty of friction - imagine it: thousands of boys of various ages, thrown together in a crevice deep beneath the earth, forgotten by the world above, unable to tell anyone of the horrors of what happens in the Furnace. No one has ever escaped - ever. There are jumpers, kids who prefer suicide to living in the Furnace. Others join the two dominant gangs in an attempt to be safe and be part of a family again. Others just take one day at a time, hoping that they don't get taken at night to who knows where.

The background to the harsh treatment of young offenders stems from the Summer of Slaughter when groups of children roamed the streets, killing scores of people. New stricter laws were brought in to combat youth crime - if you act a hooligan, you will pay for it. There is no nanny-state - you get tossed in the Furnace, with no recourse, no chance to get bail - you get sent there, forever.

It is harsh reality for Alex to deal with - but he chums up with his cell-mate and learns the ropes of how the Furnace works. He toes the line, but his mind is at work on a way to escape. He does not give up, no matter what he faces. With a handful of friends he plots and plans, all the while being witness to the horrors of the Furnace.

It is a book for slightly older readers (12+) - not necessarily for bad language or difficult language, but probably for the nightmare situation the characters find themselves in. The Furnace is someone's worst nightmare come true. There are remnants of The Running Man, Shawshank Redemption and Resident Evil (those bloody dogs!) and an imagination worthy of Frank Miller, Mike Mignola and Guilermo Del Toro. In other words, Furnace: Lockdown will make an excellent movie - it has elements of the movies I've just mentioned, but more importantly, it is its very own creation and a shocking non-stop ride that will leave you wanting more. Reading for boys (and adventurous girls) does not get better than this! I think Mr. Smith should get a Batman badge for excellence, creating both an interesting main character and protagonists (baddies) with enough menace to give you the hibbie jibbies just reading about them on the page and a storyline that keeps you pinned to the pages...to the extent where your Sunday lunch ends up being a bit crispy as you accidentally forgot about it in the oven, as you were reading...

Find Alexander Gordon Smith's website here. Furnace: Lockdown is published 5th March 2009 in the UK by Faber Kids.
Who wrote this? Liz at 10:12 am

Makes me think Of the Chronicles of Riddick where he's sent to Crematoria. *grin* I loved that movie so I'l add this book to my Amazon wishlist and hope for the best.

what convincing review.
I added the book immediately to my list.

Ahh, fun! Sounds like prison break but it actually ends instead of going on far too long. Also sounds a bit like a book I've just finished - Inside the Cage by Matt Whyman.
Great review - I've added it to my list too :)

Thanks guys for the lovely comments - it's worth it. Keep an eye out in the next few weeks for signed copies coming up for grabs!

this guy is alegend i've read all of his books and I crave them!!!!!!

I LOVED this book! Am waiting (not so patiently) for Solitary...

Sounds pretty good! I'm getting into YA reads now, got Dean Vincent Carter coming up, but Furnace sounds good. :-) Thanks for the great recommendation, Liz. :-)

Read the Advance copy and couldn't agree with you more! CHEERS!