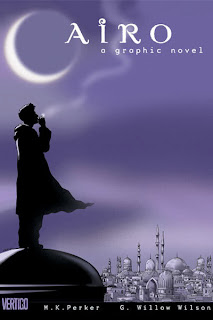 Synopsis:
The creative team behind the new monthly series AIR brings together ancient and modern Middle East with a Vertigo twist. A stolen hookah, a spiritual underworld and a genie on the run change the lives of five strangers forever in this modern fable set on the streets of the Middle East's largest metropolis. This magical-realism thriller interweaves the fates of a drug runner, a down-on-his-luck journalist, an American expatriate, a young activist and an Israeli soldier as they race through bustling present-day Cairo to find an artifact of unimaginable power, one protected by a dignified jinn and sought by a wrathful gangster-magician. But the vastness of Africa's legendary City of Victory extends into a spiritual realm – the Undernile – and even darker powers lurk there…
Cairo was my first official purchase from Orbital Comics (the other purchases were done by Mark so they don't count as being purchased by moi) and I couldn't have been happier with it. Beautifully illustrated by MK Perker I was sucked into the story of the various characters as they go around one of my favourite cities I've ever visited.
The story starts off quietly, almost unassumingly, following the five different characters, effortlessly setting them up and giving you a handle on their motivations. We have a drug-smuggler, with a sister who is friends with a journalist experiencing some heavy censorship with the press, who in turn meets an American girl travelling around Egypt on her own. The smuggler sells on a hookah he found in an abandoned shack to a Lebanese boy but the hookah's owner wants it back and takes the reporter and American girl hostages to get it back...and that's because the hookah contains a genie.
It's an involved, interesting story, with glimpses into a culture everyone thinks they know something of or have an opinion about. I enjoyed Cairo and feel that you can read as much as you want into the overall story, or you can check it out because it's an entertaining read that is beautifully drawn by MK Perker and cleverly written by journalist G Willow Wilson.
Cairo is published by Vertigo and should be available in most comic book shops / online.
Who wrote this? Liz at 8:37 am

Sounds fab - adding this to the wishlist.

I remember reading about this a while back, but forgot all about it. You have reminded me to check it out.