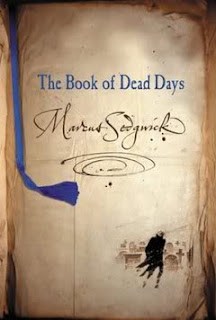 I am so very pleased to have my buddy Sarah Bryars (she is Esssjay on LiveJournal and @Esssjay on Twitter) helping me review some of Marcus Sedgwick's books. As you can tell by the small little advert on the right hand side of the blog, January 2010 is "Marcus Sedgwick Month" on MFB.

There is a magician called Valerian who must save his own life, or pray the price for the pact he made with evil so many years ago. But will alchemy and sorcery be any match against the demonic power pursuing him? Helping him is his servant, Boy, a child with no name and no past, and the quick-witted Willow, and watching their fortune, mapping their destinies ... is Fate.
Sarah says:
I first read this when it first came out and loved it at the time. When it came to re-reading it I discovered that I really couldn’t remember a great deal of detail except the feeling that the book gives you. It left me with the image of shadowy halls and dark, dirty streets. The story takes place on the days between Christmas and New Year but the celebration of this time doesn’t touch the inhabitants of the novel.

It starts with a magic show which sets the framework of the whole book. You feel as if you’re being shown one thing while the author’s sleight of hand is hiding the truth from you. Boy is Valerian’s assistant and slave. He can’t remember a great deal of his life before he lived with Valerian but is simply grateful for a place to sleep and the meagre food he’s given. Valerian is a character with few redeeming qualities. On odd occasions throughout, he treats Boy with kindness but moments like these are rare.

Valerian, who’s always troubled, has recently become more morose. He sends Boy out on endless errands and one of these leads to Boy witnessing a murder. On the other side of the city a girl called Willow discovers the dead body of the theatre owner where she works. Both Boy and Willow find each other in time to be arrested for murder and thrown into prison. Valerian rescues them and they are thrown together in a quest for a book that Valerian believes will save his life. This search takes the characters to suspicious inns, graveyards, underground canals and crypts.

Although I had little sympathy for Valerian I didn’t question Boys devotion to him. The alternative to the abuse Boy receives is the street, starvation and the opportunity to freeze to death. Willow is a wonderful character, she becomes the reader and asks the questions that Boy would never think of. She feels the need to take care of Boy (and Valerian to an extent). As the story progresses you get to watch their relationship develop in a touching way.

The story itself progresses at speed. There’s hardly any downtime and the characters ricochet from one event to the next. This gives the book a breathless quality that is exaggerated by the short chapters. Most of the action takes place at night. Other themes include grave digging, scientific discovery, taxidermy and the search for the book. I loved the gothic feel of the novel, you feel as if the characters’ lives are taking place out of the view of society in a secret world. It’s very seductive and secretive, the book is full of the unknown. Sedgwick is a master of world creation. The one that he’s created in The Book of Dead Days is so shadowy and alluring that it was far too easy to slip back into it again.

The final chapters do answer many questions but the very last few pages do leave you hungry for more answers and sets the reader up for the sequel; The Dark Flight Down. So, if you love the gothic and shadowy this book is for you. However, if you like something a little more flowery or glittery then leave this; it’s relentless in its bleakness and not for those with a weak stomach.
**
Liz says:

I recall reading The Book of Dead Days, having bought it from Ottakars in Bromley. I had carried it home like it was a trophy, made myself tea and sat down and read it in one fell swoop. Then I made Mark read it. This was quite a few years ago. I've been a fan of Mr. Sedgwick since then. Which is why I've decided to have Mr. S be the first of our "Author of the Month" authors on the blog for 2010.

Reading The Book of Dead Days I was struck by the strong imagery, the sense of place in the novel. I loved this dark city he created with its winding alleys and shadows that lurked. I loved the use of language and the style of his writing. How quickly he set the whole story up and how it just escalated from there, bouncing you along, come hell or high water.

You had to be a cold-hearted person not to feel empathy with Boy. Willow's treatment was equally harsh at the hands of her mistress and through both these two characters you experience a world that is dark, grim and yet, and yet, there is this vague hope of something less ugly just around the corner!

It has to be one of my all-time favourite Marcus Sedgwick books out there and having the chance to revisit it for the purpose of the Author of the Month has been good fun.
Who wrote this? Liz at 8:09 am

This was the first book that I read by Marcus Sedgwick. It was a fair few years ago now. I own six books by him and he is absolutely one of my favourite authors. Great choice for author of the month.

This was the book of his that took me from liking his books to being a real fan of them.