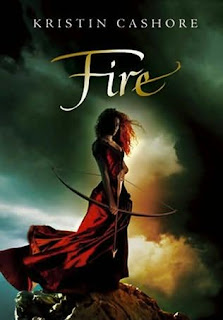 Synopsis
Set in a world of stunningly beautiful, exceptionally dangerous monsters, Fire is one of the most dangerous monsters of all - a human one. Marked out by her vivid red hair, she's more than attractive. Fire is mesmerising.

But with this extraordinary beauty comes influence and power. People who are susceptible to her appeal will do anything for her attention, and for her affection. They will turn away from their families, their work, and their duties for her. They will forget their responsibilities to please her . . . and worse, crush nations, neglect kingdoms and abuse their power.

Aware of her power, and afraid of it, Fire lives in a corner of the world away from people, and away from temptation. Until the day comes when she is needed - a day when, for her king, she has to stand against not only his enemies, but also against herself . . .
I completely missed the Graceling phenomena. I knew of it, I knew of Ms. Cashore and thought that I'd take my own time to catch up on her writing.
And I'm glad I did. As much as I love and enjoy part of a trend, helping grow an author's reputation for her / his work, I like not being rushed, not running blindly with the crowd.
I got two copies of Fire given to me - one by Gollancz UK and one by my friend Sarwat Chadda (Devil's Kiss author) upon his return from BEA in the US. I loved the UK copy so much that it's sitting pristinely on my shelf, next to Graceling (equally pristine) whereas the US copy of Fire has been read and re-read.
Author Kristen Cashore has an incredible talent for characterisation and world creation. Rich in detail and political intrigue, Fire's world feels real very quickly. We learn that the young King Nash hangs precariously onto his throne whilst rebel lords plot to unseat him. War is coming and the royal family are keen to do anything it takes to get the upper hand to ensure that the throne remains stable.
Fire (our main character) is breathtakingly beautiful. She's a freak, a monster. Something so wildly exotic and beautiful that men (and women) lose themselves around her if they don't protect themselves against her mentally and physically. She evokes tempestuous emotions in people unprepared to meet her face to face. Some fall in love immediately, others want to kill and destroy her on the spot. Her monstrous nature acts as a mirror, reflecting hatred, violence and malice that others feel towards her when they see her.
It's a compliment to the author's skill where she manages to pull off Fire as a believable and likeable character. We could so easily not have felt any kind of empathy with a creature so almost unbelievable. And yet we do - her humanity is shown in her compassion to others, her deep care for her friends and even for those who mean to harm her. She strives to be better than her father, who had almost destroyed the kingdom. She fights to be herself and not her father's child but unfortunately for her, these things are linked.
Fire is the only human monster left. Her father, also a monster, had been killed years ago when he walked into the cage of one of his favourite caged feline monsters who promptly tore him apart. He had held a position in the previous king's court as advisor and together with the king drove the kingdom to the edge of ruin. it was now up to the King's current heir and family to protect the kingdom against invaders and war. Fire feels that she should somehow help and she does so by aligning herself with the new King Nash and his family.
The royal family held a bit surprise for me. Here was a group of people utterly dedicated to one another and the kingdom. They pulled together as a team, working hard to make Nash the king he could and should be. I was surprised by this. Too often you read the political machinations of brothers and sisters behind the backs of their siblings and it becomes a bit dull, because it's expected. By giving us a family focussed on fixing what their father and Fire's father had almost destroyed we have a formidable force to be reckoned with. And it works really well within the context of the story.
Fire has to find a way to use her powers without betraying herself, by becoming her father and manipulating others around her against their will. She has to find an inner strength and realise that her battles don't necessarily have to be fought alone single handedly. She has strong friends to stand by her side and at the end of day she has to learn that she can't do everything herself and that she has to rely on their skills and friendship as much as they need to rely on hers.
It's a beautifully written novel by a very talented author. Fire is fresh and exciting, something utterly different that will surprise you no matter what your preconceived ideas. I just wish I had more time at my disposal as I'd like to read it again. Very soon. For a third time.
Who wrote this? Liz at 8:36 am

Never read anything by this author. Will have to hunt her down!

I really enjoyed Fire as well. Now I just need to read Graceling!

Fire was a great romantic novel! Surprises on every page, but was kind of hard to understand at parts.
9/10