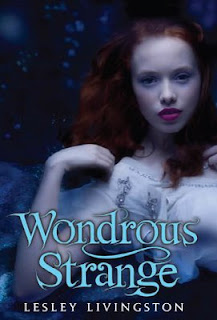 Synopsis:
Kelley Winslow is living her dream. Seventeen years old, she has moved to New York City and started work with a theatre company. Sure, she's an understudy for the Avalon Players, a third-tier repertory company so far off-Broadway it might as well be in Hoboken, but things are looking up—the lead has broken her ankle and Kelley's about to step into the role of Titania the Fairy Queen in Shakespeare's A Midsummer Night's Dream. Faeries are far more real than Kelley thinks, though, and a chance encounter in Central Park with a handsome young man will plunge her into an adventure she could never have imagined.

For Sonny Flannery, one of the Janus Guards charged by Auberon, the King of Winter, with watching over the gate into the lands of Faerie that lies within Central Park, the pretty young actress presents an enigma. Strong and willful, she sparks against his senses like a firecracker and he can't get her out of his mind. As Hallowe'en approaches and the Samhain Gate opens, Sonny and Kelley find themselves drawn to each other—and into a terrible plot that could spell disaster for both New York and Faerie alike.
Ever since Holly Black reinvented fairies for me a few years ago in Tithe (and subsequently Valiant and Ironside) I've been a sucker for well written novels with a bit of fae magic thrown in.
Wondrous Strange has more than just a big of fae magic thrown in. The book sizzles with magic. Kelley's character in WS is that of the sweet ingenue who is determined to make something of herself in New York. We identify with Kelley because all of us has wanted something strong enough to move heaven and earth to get it and even if it means putting up with overly dramatic producers and tantrum throwing cast members of a acting troupe, well then, she's up for that too.
When she lands the role of Titania in the production, instead of wowing everyone with her acting ability, Kelley manages to make a complete mess of things and she escapes to the peace and quiet of Central Park to rehearse the role. This is where Sonny hears / sees her for the first time and he's inexplicably drawn to her. But as one of the guards watching the portal between the human and fae worlds, he has other, scarier, clawed and tentacled things to worry about at first. Even if the image of Kelley keeps reappearing in his mind.
Kelley and Sonny's romance is slow in developing and it's very sweet - also quite amusing. Kelley is both fierce and confused as to why this strange boy from the park alternately seems to be stalking her, saving her, scaring the life out of her.
Also, Kelley has a problem: after almost drowning in Central Park, she made it home to the small apartment she shared with her room-mate and unexpectedly finds that the horse she saved followed her home and seems to really like hanging out in their bathroom...and uh, using their toiletries.
Written with great aplomb and with a sense of bubbling humour, Wondrous Strange, is a very fun read and I laughed out loud more than once. Kelley's not what she seems, no one seems to be what they seems and as the story unravels, only to be put back together, we are left with a solidly concluded book that has a few frayed tassles left over to segue neatly into the sequel: Darklight.
I don't mind this as both Kelley and Sonny are characters I'd like to spend my time with and their story is fresh and engaging. Also, those covers - tell me you don't want books that look this gorgeous?
Find Lesley Livingstone's website here. Wondrous Strange has not yet been published here in the UK but it is available on Amazon and through The Book Depository.
Who wrote this? Liz at 8:13 am

Wow,Liz, this is one for both Laura and me! It sounds great fun but whether I can get over her pinching the horse in the bathroom bit from Douglas Adams remains to be seen!

I'm always promising myself to get a copy of this one and then forgetting about it - probably because it's not available in bookstores here. It sounds lovely though!

I've been looking at this book for ages, loving the cover. Now I'll have to finally read it. At least the sequel is already out, so I don't have to wait.