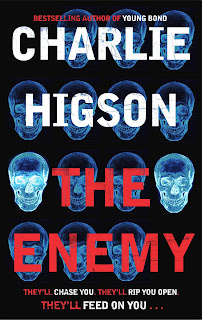 They’ll chase you. They’ll rip you open. They’ll feed on you.

When the sickness came, every parent, police officer, politician – every adult- fell ii. The lucky ones died. The others are crazed, confused and hungry.

Only children under fourteen remain, and they’re fighting to survive.

Now there are rumours of a safe place to hide. And so a gang of children begin their quest across London, where all through the city -down alleyways, in deserted houses, underground- the grown ups lie in wait.


The story starts with a bang, a daring daylight raid by a posse of diseased and animalistic adults that sees them make off with a small boy for the larder. It’s a dramatic start that sets the tone for the rest of the story and cleverly slips in a whole bucketful of background info.

By the time we join the story, the mysterious plague has already wreaked its havoc on the adult population and the city; the kids who are still around have already learned hard lessons and are, in the most part, veterans of their apocalypse. Their position is precarious; while their current hideout is secure for the moment, it isn’t sustainable; there are too many mouths to feed and resources are rapidly running out.

While not a wholly original concept, what makes The Enemy stand out is the constant feeling that a big brown comet is about to hit the fan; it’s a relentless tension uniting the escapades of the various characters as time runs out and the adults start displaying symptoms of a cunning, feral intelligence. It’s really one of those ‘missed-my-station’ books- it’s hard to tear yourself away once you get into it. Charlie doesn’t pull any punches on the violence either, an important consideration that prevents anything from being taken for granted and makes for scenes of exquisite tension, because there’s never any doubt what is at risk.

The principal characters are well drawn and convincing; their bravado and desperation is underpinned by sometimes poignant reminders that these are, after all, otherwise normal kids who’ve been plunged into a world where everyone they’re supposed to trust is trying to eat them.

I’ve not read any of Charlie’s previous offerings, but if they’re anywhere as gripping, tense and more-ish as The Enemy then I’ve done myself a disservice.

You can visit The Enemy website here and read an extract here.
Who wrote this? Mark at 12:45 pm

This one looks so interesting...I'll add it to my wishlsit.

Ooh... I've seen this one about but never really looked at it, sounds like a great read though, so I might just take a closer look next time I'm in a bookshop!

OMG this is my favourite book of all time i love it though it is not for the faint hearted! i could not put it down