The Toymaker by Jeremy de Quidt 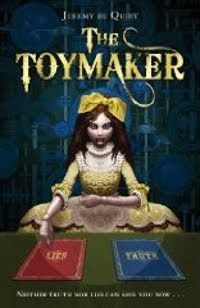 Synopsis:
What good is a toy that will wind down? What if you could put a heart in one? A real heart. One that beat and beat and didn’t stop. What couldn’t you do if you could make a toy like that?

In The Toymaker we meet someone we should all really like, especially if we are children: the toymaker, Menschenmacher. His creations sound amazing, creations we would all want to play with. Very soon, within a page, we do realise however that the toymaker, the "people maker" is not a cuddly friendly type of elderly uncle whom we can run to with a broken doll to fix. No, here's someone who is part scientist, part explorer, part nightmare maker. His toys are automatons, beautiful creations that the rich and famous strive to own. But there is that element of where he wants to meld the inanimate with the animate that is just shiver-inducing.
The Toymaker is set in an undisclosed European country over a short span of time for the reader - with that comes the bitter cold, the distant almost unfriendly populace and a feeling that really bad things can happen to good people. It's a harsh winter, wolves prowl the woods and people's lives are hard.
We also meet Matthias, a young boy who works as a Conjurer's assistant in a travelling circus. Well, he doesn't really work as anything to be honest. He's more a dog's body, doing things his grandfather, the conjuror wants, and then gets treated abysmally, beaten, starved and shouted at by everyone else in the circus; in other words, Matthias's life is hell. That is until his Grandfather suffers some kind of attack on stage and then dies. Matthias is in shock. A man he doesn't know walks up and starts searching his grandfather for something and Matthias realises that his grandfather may not have been the man he thought he knew. The well-dressed stranger leaves to speak to the owners of the circus and Matthias discovers a crumpled piece of paper in his grandfather's mouth that he was keen to hide...
Matthias and all his grandfather's belongings are "sold" to the mysterious man, Dr. Leiter and Matthias is bundled into a coach and driven through the night to an inn where he's questioned by the doctor and the odious coachman, Valter, a mishappen dwarf with the strength of ten men and a heart blacker than the abyss. One of the girls working at the inn, Katta, realises these two men are hurting Matthias and rescues him after he is thrown out of the window of the inn and together they go on the run.
Soon they throw in their lot with the mysterious and ruthless Koenig who is keen to figure out what Matthias's secret is and ultimately what the strip of torn paper is that he carries with him.
The Toymaker is beautifully written by Jeremy de Quidt. It's deeply dark and disturbing with touches of the macabre that will scintillate younger and older readers alike. The action is vivid and moves the story forward as much as the quest to find out the secret of the scrap of paper. The ending is a twisty turning thing that had me re-reading it because it took me that much by surprise.
I'd recommend The Toymaker to read out loud too - there is a dark magic to the writing that just begs to be heard aloud. And some fantastic news: The Toymaker has been short-listed for the Waterstones Children's Book Award 2010 which is excellent. I am so happy for Mr. de Quidt who clearly had a great time writing this wonderfully evocative and dark piece of literary horror for the younger folk.
The Toymaker is out now in paperback from David Fickling Books.
Who wrote this? Liz at 11:15 am

I actually just heard about this one and added it to my wishlist yesterday. It looks really good!

THIS BOOK IS AMAZING! I just finished the book just now and ithas such a stirring ending! Jeremy De Quidt, make more!