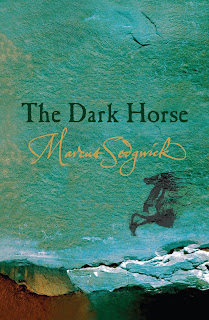 A boy destined to lead his clan; a girl raised by wolves; a stranger with a sealed box. These are the elements of this powerful novel, set on a rocky northern coast in a distant time, in a small community who live in dread of the coming of the legendary warrior tribe, the Dark Horse. Told in part by the boy, Sigurd, himself, it is a dark and dangerous story of conflict and betrayal. With its strong sense of time and place and the magic of a primitive people, THE DARK HORSE again confirms the exceptional talent of Marcus Sedgwick.

The Dark Horse by Marcus Sedgwick ought to be read in the glow of a crackling fire whilst listening to the bluster of wind beyond the window. It is a tale that smells of the raw fish and animal skins of pre-history and yet is timeless in the telling; a tale that evokes barren landscapes, crashing waves, and the cruelty of winter. The cold seeps through every page, held at bay only by the light of the campfire and the skill of the storyteller.

Sedgwick’s language is sparse, but always evocative. His characters are three-dimensional, consistent and familiar, despite the far-away feel of the setting. But just like characters of the real world, each of the Storn have secrets and surprises for the reader.

By now you might be getting the hint that I really enjoyed reading this book! I was immediately drawn to the intriguing character of Mouse, with her ability to communicate with hounds and leap into the mind of a bird. And I came to love Sigurad for his bravery and warmth.

The narrative switches between first and third person, a risky strategy for any writer. At first I was only interested in the story as told in first person because it outlined how Mouse came to live with the people of Storn. I was less engaged by the third person. But as the story went on, and the narratives became entwined, I noticed the switch between them less and less, until I hardly noticed the switch at all. There is no doubt about it: Sedgwick is masterful in his handling of language.

As much as I enjoyed this book, my only fear would be is that this is the kind of story that adults’ love, and kids wonder what the fuss is about. The shortness of the chapters kept me turning the pages (a lot of them were only a couple of pages long) and I suspect would keep kids reading too. However, I think what kept me hooked was the beauty of the writing rather than the strength of the story. A week later, I can remember the characters and their world, but struggle to remember how the story ended.

All in all, I really, really enjoyed this book. I liked the fairly predictable twists and turns of the plot that had that had an almost mythic feel, and particularly enjoyed the lyrical beauty of the language. A perfect read for a cold afternoon in winter.

***
The above guest review blog post was brought to you by my friend Sharon Jones (@PoodlePowered on Twitter). Sharon and I met without realising it at the SCBWI Winchester Conference last year - we've been speaking on Twitter before the conference and then attended a few talks together at Winchester but not realised who the other person was till after the fact!
Yes, this happens in real life, not just romcoms from Hollywood.

When I told Sharon that I'll be hosing the Marcus Sedgwick Author Month she came close to being histerical and I roped her in to review something for us. I sensed a fellow fan.

This is one of the MS books that I've not read yet and I'm looking forward to indulging in reading it. I love Sharon's enthusiasm for the uniquely named Mouse who sounds anything but timid. I fully appreciate her remarks that some of the nuances may bypass the age-group it was intended for but then I also think that if one of the younger folk read it and liked it, they would no doubt revisit it when they are older and then fully appreciate the depth and scope of the story. I'll be sure to pop back with my own view(s).

So, thanks Sharon for this fantastic review! Sharon's a writer of YA fiction with a paranormal twist and you can find her website here.
Who wrote this? Liz at 8:07 am

Ooh, I've just been reminded why I liked this one! I can't believe you've not read this one Liz! :P You really need to rectify this oversight ;)