Hush Hush by Becca Fitzpatrick - an interview with a difference

Last week, during some of the most vile weather London has ever seen, the amazing marketing team from Simon & Schuster pulled a marketing stunt which made several newspapers and industry publications.

Naturally Mark and I turned up for this, along with Kaz Mahoney and Tiffany Trent. We got drenched but it was worth it - there was a good turnout at Trafalgar Square eventhough we had to canoe there. The Editorial Assistant, Lydia got herself up onto the fourth plynth at 8pm for a reading of Hush Hush. She wore feathery wings and looked wet but determined. We loved her for it. This is the direct link to the entire event.

In the spirit of this amazing event, I decided I had to get more information about Hush Hush from Simon & Schuster's marketing team. So I sent them a stack of interview questions and they kindly answered them.

Hush, Hush, simply put, is a brilliant read. It stands out because it is well written, well plotted and has strong characters that are engaging, likeable and intriguing – it’s a breath of fresh air in a genre that has become oversaturated and stale. 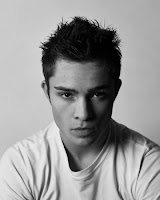 Having thought long and hard about it, we’ve decided that Ed Westwick (Gossip Girl) has the dark hair, dark eyes and dark moods to fulfil the role! We know he can pull off an American accent, too…

When thinking of the characters, your own reactions and the story in Hush Hush, do you think there is a song which could be used as the theme song?

I think we’d have to look to Becca Fitzpatrick for the final say - she has a playlist on her website, www.beccafitzpatrick.com. Her playlist has a really cool 70s and 80s focus, so if we had to pick a modern theme song, perhaps Muse could offer something suitably atmospheric!

How on earth did you manage to get space on the Fourth Plinth in Trafalgar Square? Was it difficult?

It wasn’t difficult, as anyone could enter – you just had to register your name in the lottery at www.oneandother.co.uk, and they picked 2400 people to take part out of the 34,000 or so who entered. So not too difficult to enter, but very surprising to be picked!

What did you do whilst you were up there?

I read the first two chapters of Hush, Hush aloud – yelling most of them as the rain got in the megaphone! And I gave everyone a shout out to the author, watching from the states. I did that for the first 45 minutes, and then moved on to my own agenda, which was mostly saying hi to all my friends watching from overseas, and telling some really bad jokes!

What was the event like as it turned out to be a rather awful wet day?

It was great! Very exhilarating, but as it poured rain the whole time the logistics were a lot trickier than we thought – towards the end I didn’t use my umbrella as I was already soaked through, and my poor copy of the book is now one big wet lump of paper. And people still turned up to support which was really encouraging, so we gave away lots of free books to those who made it. I wouldn’t change it really as it was a great experience, but I can’t lie - it would have been nice to do it in the dry!

I was one of the lucky people who received the card extract and feather to promote Hush Hush – I loved it! Who came up with this excellent idea?

This idea was thought up by all of us in the children’s publicity team – everybody likes a teaser! The book lends itself perfectly to feathers as part of the package, so a black feather to represent Patch was perfect.

Will we be seeing Becca visiting the UK at all in the near future?

There are no plans as yet for Becca to visit the UK.

What has been the reaction to Hush Hush in the teen market?

So far, there seems to have been a brilliant response. All the bloggers I have seen are very excited about the book, and those that have read it have loved it. There seems to be a real buzz surrounding anything Hush Hush – which can only be a good sign! The book is still over a month away from its UK publication, but the sense of excitement is very apparent.

Who do we think will win in a fight between Edward and Patch?

Have we got any idea what will be happening on the follow-up novel? Maybe even just the tiniest of hints?

Not a clue! I wish I did! There is a title, Crescendo, but no further info yet…

Why do you think we love bad boys in literature so much?

I think there is more than one answer to this question, but generally I would say that bad boys are well loved because they pose a challenge. In literature, a big enjoyment of reading is the mystery of what is going to happen at the end; that’s essentially what keeps you hanging on to any plotline. When the mystery inevitably becomes wrapped around the resident bad boy of the novel, we are dragged not only into the plot and the intrigue – but the character surrounding it.

I think another strong element of this is usually see the bad boy through the eyes of the female protagonist, and our connection to them puts us in the perfect position to be drawn to the bad guy too…

Not to mention they are usually blessed with shockingly good looks and a tendency to get rain soaked!

Who would play Nora in the movie?

We’ve wracked our brains on this one… Nora is a toughie to cast! But we’ve cast Selena Gomez – she’s dark, gorgeous and the perfect age for Nora!

When can we expect Becca’s new novel?

Exact dates are TBC, but hopefully the new novel will drop in the UK for autumn 2010.
Thanks so much to Team S&S for this fab fun interview. Now for the good stuff!
Competition Time:
We have one paperback copy of Hush Hush - slightly wrinkled from the rain - to give away. This is open to residents in the UK only, I'm afraid - purely because I have to fund the postage myself. So, email us to our usual address with your name. We'll let the comp run till next week Monday, 27th September.
Good luck!
Who wrote this? Liz at 9:10 am

Ooh! Sounds like great fun!
*scurries off to enter the competition*

Great idea, I loved reading this! I can't wait for Hush, Hush to be released over here, and it's brilliant that S&S are so excited about it.

Also completely agree with Ed Westwick as Patch - especially in that picture.

Oh, awesome! Now I feel like I was actually there :)

Great interview! Wish I could have been at Trafalgar Square with you guys. Why do all the really cool events occur when I'm out of the country?

There are great questions. I was at the event in Trafalgar Square too (in very wet wings) and I thought Lydia did amazingly well to keep going in that downpour!

Having now read the book I totally think Ed Westwick would make a great Patch. And quite honestly, I think Hush, Hush is going to be *huge* here.

That is just the best marketing idea. I loved it! Wish I could have gone.

Excellent interview questions too. I'm really looking forward to this one.

I'd totally love to see Ed Westwick as Patch *drools*

I totally disagree about Ed Westwick being Patch. I think that Tom Hughes from Cemetry Junction would be perfect. He's hot, he's dark haired, dark eyed and he could easily play someone like Patch!