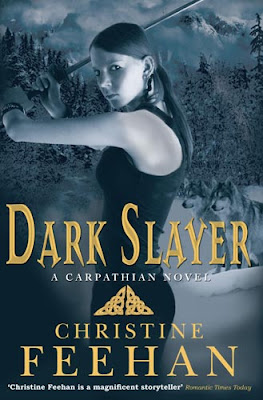 We know already that I’m a big fan of Christine Feehan and I love her Carpathian series. I think we can all agree that if a series has been going for as long as this (16 books so far, I think) some books will be better than others. I am very happy to announce that, in my opinion, “Dark Slayer” is one of the best books in the series. I won't give you a summary of what's happened so far, otherwise I would be here for ages. If you haven't read the series before start with "Dark Prince".

Here is the blurb for "Dark Slayer":

A rumour has persisted in the vampire world of a dark slayer - mysterious, elusive and seemingly impossible to kill, she is the one hunter who strikes terror into the hearts of the undead. She is Ivory Malinov. Her only brethren, the wolves. Long ago betrayed by her people, abandoned by her family, Ivory has lived centuries without companionship or love. She has sustained her sanity by preparing for one purpose- to destroy her greatest enemy. Until the night she picks up the scent of a man, her unexpected salvation. Her lifemate. The curse of all Carpathian women. He is Razvan. Branded a criminal, detested and feared, he is a Dragonseeker borne of one of the greatest Carpathian lineages, only to be raised as its most despised- and captive- enemy. Fleeing from his lifetime of imprisonment, Razvan now seeks the dawn to end his terrible existence. Instead he has found his deliverance in the Dark Slayer. In spirit, in flesh and blood, in love, and in war, Ivory and Razvan are made for each other. For as long as they dare to live.

Wow! Ivory and Razvan are two of the most well developed flawed characters I have read about in a long time. Both have overcome horrendous torture and pain and developed into amazing people, very much shaped by what they've been through.

Ivory has had no contact with the Carpathians in centuries. She does not trust them and lives only for one goal: to kill Xavier the high mage. She has trained and prepared herself, gathering intel with a single-minded thoroughness that is unbelievable. Razvan gave up his body and his soul to protect his sister and later his daughter. He has been the captive of Xavier for centuries and suffered unbelievable atrocities at the mage’s hands. Somehow he managed to stay sane despite the knowledge that his people think of him as a traitor and pure evil. On the day he’s finally escaped and seeks to end his life, Ivory finds and rescues him.

Neither of them are quite sure what to do with the other. Unlike “normal” Carpathians Razvan does not speak the binding words as soon as he sees Ivory, but gives her a choice. When it becomes obvious that Razvan has valuable information on Xavier, they decide to work together to defeat the enemy. But will they be able to defeat the high mage who has been working on the destruction of the Carpathians for centuries? Will they be able to persuade the Prince and his people that they are on their side? Or will Xavier’s “experiment” succeed in the end?

I LOVED this book! Ivory and Razvan are well developed and believable (well as believable as vampires and mages can be;D). Ivory in particular breaks the mold because she’s a lone Carpathian woman who slays vampires. I love the way she tricks the Ancients and shows them her skills and capabilities. Her and Razvan’s relationship develops slowly, in a way that shows how they’re trying to overcome their demons and work towards being able to have a loving union. It is beautiful to read and draws you right into the core of the story.

I really enjoyed reading about Ivory and Razvan interacting with characters from other books. You see story arcs that have been going on for a number of books coming to an end (anybody want to know if they manage to finally find a cure for the infertility and infant death or a way to overcome the vampires fighting together? Hah, you’ll have to read the book!) and new developments taking you into a different direction.

I did feel the end was a little rushed. To me the whole book was in preparation of that final battle and then it was over within a few pages. I also got a little bit annoyed with all the Carpathian language thrown in, for example Razvan calls Ivory “keeper of my heart” and every time he does so you have four unpronounceable words in italics. It wouldn’t bother me so much if it was once or twice, but every time? I’m sure a lot of effort has gone into creating the language and I am sure other readers will enjoy the detail, but I found it a little jarring.

Overall I thoroughly enjoyed “Dark Slayer” and I know I will read and re-read it over and over again. Christine Feehan introduces a number of new characters as well as renews our acquaintance with some old friends. I cannot wait to read Skyler’s story and I hope I won’t have to wait too long.

Here is Christine’s website http://www.christinefeehan.com/. Dark Slayer is published by Piatkus and out now.
Who wrote this? Tina at 12:00 am