Why Geeks Rock by Julie Cohen, author of Girl from Mars

I am so flattered to have Julie Cohen pop by MFB to do a guest blog on writing one of my favourite books of 2009 - Girl From Mars. I cannot urge you enough - if you are a geek in any shape or form - to pick up a copy of this very sweet, very poignant and very true little book. Yes, even the boys will get a kick reading this. Challenge yourself - it is light on romance and chock full of real situations and characters who are fantastic geeky peeps, just like us. Plus, the cover is a must-have for any genre fan's bookshelf.

Thanks for inviting me to guest on your blog, Liz. I’m so glad you enjoyed Girl from Mars! (Review here) 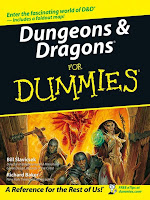 As an author, your books are supposed to be like your children, so it’s probably unfair to have favourites, but I have to say that Girl from Mars is probably the book that’s closest to myself and my own experiences. See, in school I was a geek. I grew up in a small town in the mountains of western Maine, and I was most definitely an oddball there. Like my geeky heroine Fil, I liked dying my hair strange colours and I do believe I was the first kid in my school in the 80s to have pink hair. I was unlike my heroine Fil in that I had quite a few friends, and while she’s an artist, I was geeky about more showoffy things like being in plays and singing and wearing weird clothes that I’d found in secondhand shops. But like Fil, I loved science fiction, and playing Dungeons and Dragons, and reading comics. Because of these interests, I had a lot of male friends. I drew on a lot of this when I was writing the book.

It’s interesting how many people I’ve encountered who say that they were geeks in school, too. Promoting this book has introduced me to lots and lots of fellow comics fans, male and female, and also a lot of people who love role playing games and Star Trek and Dr Who. I’ve had more comments about my photo of me with a Dalek than any other picture on my website, except for the one of a bare-chested Ryan Reynolds carrying an axe. Go figure. 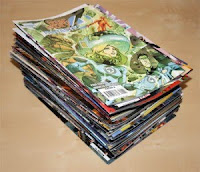 But the sci-fi and the comics and the dyed hair and the D&D are all only the outward signs of being an outsider. And in fact, all of these little fandoms have their own communities and their own lingo and their own codes of conduct.

I think the more important feeling of being an outsider is when you stand in a room and you feel that everyone else knows something you don’t. They know how to dress, and how to act. They don’t have to worry about fitting in. It’s like everyone except for you has been given a rule book, but you never got one because you were in the bathroom or whatever when they were being handed out. 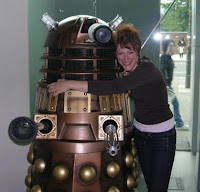 Julie with friend
I remember feeling that quite vividly in high school. I still feel it now. (Actually, these days I feel it more than ever, because being an author requires you to sit in a room with nothing but a computer and your own imagination for long stretches of time, and when you emerge you tend to have forgotten the most basic of social skills.) And—here’s an interesting thing—I’m coming to believe that, in this way, almost everybody has felt, one time or another, like they’re an outsider.
The easiest way of dealing with feeling like a freak is to make yourself a safe little world with people you trust, people who won’t look down on you. That’s what my heroine Fil does. Excluded from girls’ friendships at school, she befriends a bullied nerd named James Lousder (aka “Loser”). Later on, they make friends with quiet giant Digger and timid war-comic artist Stevo. When the four of them are together, they can do just as they like. It’s safe.

There are down sides to this safety, though. For one thing, small intense friendship groups can isolate themselves from reality. Groups are more conservative than individuals. They have their own internal pressures, too—even when they’ve been formed to escape the pressure of other people’s expectations. And they have difficulty adapting to new things, like when one of the group’s members starts a relationship with someone else. I really enjoyed exploring the dynamic of the friendship between Fil and Jim and Digger and Stevo, and though the book is a romance, it’s no mistake that it begins and ends with the friendships.

I think the thing that was the most pure fun about writing Girl from Mars, though, was making up the story for “Girl from Mars”, the comic book that Fil and Dan are working on together. They do six issues, and I outlined every one of them. I made up a backstory for the character Girl from Mars, researched similar comics and how comics in general are created, and basically let my imagination go wild. It’s not often, as an author of contemporary romance, that you get to write about time machines, space stations, Arcturan electricity, and former-lab-assistants-turned-evil-geniuses called Glypto.

Awesome. Especially for a geek like me.
*Competition News*
Julie's truly generous publishers, Little Black Dress Books, have agreed to let us have two copies of this excellent feast of geek and romance to give away - UK entrants only, I'm afraid! So, all you have to do is email us: myfavouritebooksatblogspot(at)gmail(dot)com and put "GIRL FROM MARS" in your subject line. The winner will be decided via Random.org in one week's time - i.e. 9th September. We will then contact you to let you know that you've won and if you could then forward your details to us to send onto LBD Books.
Who wrote this? Liz at 10:13 am

If you think you can handle real horror try out this outrageous, graphic piece:
http://www.fishmansqueenofdarkness.info

This was banned from publication almost ten years ago because of the extreme graphic descriptions.

WOW is what I have to say!

I loved reading this interview. Thank you for a brilliant read!