My Games Day started very early on Sunday. The last two Games Days I’ve been to, I’d travelled up with the coach organised by the local Games Workshop store; while we’d arrived on time on both occasions, we’d also been late enough to have to take up residence at the back of the queue to get in.

This year my friend Dom & I decided to avoid that particular problem.

The alarm drew me stumbling and cursing from bed at the ungodly hour of 02h20. Fortunately I’d laid out everything earlier was out of the door, fed, clothed and with my satchel in hand within 25 minutes. I charged through the empty streets of London picked Dom up en route and we eased onto the all but deserted M40, popping Heart of Rage into the CD player to set the mood for the day.

With no traffic, we pulled into the grounds of the NEC a couple of hours later. After a bit of searching, we managed to find one of the security/parking guys who directed us towards a parking lot where we could pay on the way out. We strolled down past the giant pond and towards the main entrance as the first faint blush of dawn brushed the horizon. There were a handful of other hardy souls/ fanatics there, all in good spirits, and after finding out that the Subway was already open, we grabbed the first of many coffees and sat down to leaf through the new Space Wolves codex that one of the other fan(atics) had lent us.
Soon after we were ushered to an empty hall the size of a B52 hangar, where we were settled in as the head of the queue. All we had to do now was occupy ourselves for 4 hours. The amazing thing is, the time went quickly as conversation jumped from the Space Wolves to various books, gaming anecdotes, stories from previous Games Days, hobby tips, and more. Soon enough the trickle of attendees turned into a steady stream as the coaches began arriving. The stewards were unobtrusive but effective, funnelling the new arrivals to the end of the queue (and past our increasingly smug faces) and keeping everything under control, although their job was made easier by the almost festive atmosphere.

Seeing the faces of the later arrivals as they entered the hall and saw the queue, which snaked up and down the length of over half the ‘hangar’, was almost enough to make the early start worthwhile all in its itself.

Eventually though it was time for the Day to officially start and we were escorted to the main entrance and let loose in the main hall- it was exhilarating to be there first ones across the threshold, with not another queue in sight! We raced to the Black Library stand, where I picked up two copies of Sandy Mitchell’s Ciaphas Cain chapbook and a copy of Brothers of the Snake, which I’d been thinking about doing for a while. Dom’s conviction that it was the best Space Marine novel ever and Dan’s presence tipped the balance and it was straight to the tills while those behind me made a beeline for copies of Blood Pact, Dan’s new Gaunt’s Ghosts novel (and one which would be sold out before midday!)

And here’s a tip for next year- bring cash! You can pay by card, but the connections are always painfully slow- this is what causes the bottleneck at the stand later in the day. It’s been the same story for the last few years. Fortunately, I had learned this lesson and was soon in already snaking queue for the joint Dan Abnett/ Graham McNeill signing table.

I was pleased to see that they’d separated the tables- there’s always a significant (i.e ‘huge’) demand for Dan & Graham at Games Day and splitting the signings makes everything more manageable. 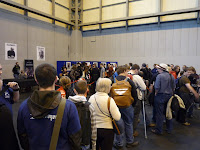 Graham and I had a good chat about Empire & Heldenhammer as he signed the books for me and I really can’t wait for the third instalment now! I did a sneaky sidestep and popped up in front of Dan, who was looking well and as enthusiastic as ever. After he drew parallels between Brothers of the Snake and the Spartan ethos I was sorely tempted to simply move across to the large café in the hall and sit and read it, but fought the temptation- there was still too much to see!
I met up with Mark Newton, who was on photo duty (inter alia) and we chatted as I waited for Dom to have his books signed by Dan- it was good to see that Mark was as excited about the day as any of the fans I’d spoken to so far and we made our way over to the other signing tables where he kindly introduced me to Nick Kyme, author of Salamander. Nick who was happy to sign the copy I’d brought along in my tardis like satchel and I reckon we cold have been there for a while chatting about the next two instalments in the trilogy if it wasn’t for the dozen or so people behind me getting a bit finty eyed. I spied a gap and defected to Aaron Dembski-Bowden’s table, who was also quite happy to sign both my copies of Cadian Blood. Dom and I then besieged Sandy Mitchell, and were chuffed to hear that not only is he elbows deep in a new Ciaphas Cain novel, it’s going to be a new series featuring the eponymous hero!

I have to say that the authors and artists who were there were uniformly generous with their time, happily signing books, posters, our autograph book and, for some lucky souls, doing impromptu sketches (next year I’m camping next to Clint Langley’s table!).

Dom and I went with the flow, worming our way through the throng, gazing with naked avarice at the treasures in the Forge World displays and the ‘Eavy Metal showcases. There was something happening everywhere you looked- Bloodbowl previews, playable Dawn of War II demos for The Last Stand and Chaos Rising, dozens of games dotted with stupendously large titans, mountains of shiny new merchandise of all varieties, video previews of the awesome looking Space Marine game, bargain sales -including ‘lucky dip’ boxes, art displays, demonstrations of 3D modelling and more. It was exhausting but gooood- fortunately Subway and the cafes were there to keep everyone fuelled for the day and did a roaring trade. And yes, there are plenty of loo’s - and they’re in pretty good condition!

As the day drew to a close I drifted back to the Dan & Graham signing as I realised I’d forgotten to get Mechanicum signed, and despite the announcements that the winners of the Golden Demon were about to be announced, the queue was still quite substantial, but both Dan & Graham were still there, signing and chatting. I bumped into Mark again and we chatted about upcoming titles for the Black Library- including the intriguing Warhammer Heroes series (this giant banner is a ‘glimpse’ of the artwork for Sword of Justice), sci-fi, blogging, books, and life in general. It was gratifying to discover that he’s as much of a fanboy as anyone else and that yes, working for B.L sounds as cool I thought it would be!
By the sounds of things, next year's going to be see some awesome titles from the Black Library. I'm quite excited about Prospero Burns, the next instalment of the Horus Heresy being penned by Dan Abnett (I've heard that he & Graham have been collaborating on aspects of it..). 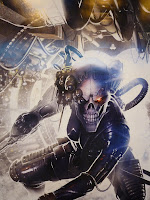 The cover for the second Heresy novel planned for 2010..
After toying with the idea of trying to fit one of the banners in the car, I figured it was time to make tracks and, having said our farewells we made our way back to the car park for the anticlimatic drive home.

*P.S* - gods, how did I forget to mention the new Space Marine Battles series?! Steve Parker's Rynn's World will be the first in Feb 2010..