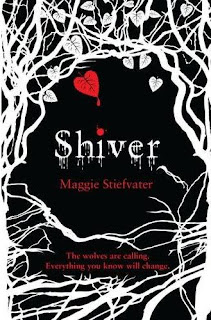 For years, Grace has watched the wolves in the woods behind her house. One yellow-eyed wolf–her wolf–is a chilling presence she can’t seem to live without. Meanwhile, Sam has lived two lives: In winter, the frozen woods, the protection of the pack, and the silent company of a fearless girl. In summer, a few precious months of being human . . . until the cold makes him shift back again.

Now, Grace meets a yellow-eyed boy whose familiarity takes her breath away. It’s her wolf. It has to be. But as winter nears, Sam must fight to stay human–or risk losing himself, and Grace, forever.

Grace got attacked as a small child by a pack of wolves and almost died as result. One wolf came to her rescue, saving her from being torn to shreds. As she grew older, she grew to have an affinity with the wolves roaming the forest outside her home in the small town of Mercy Falls but one particular wolf, her wolf, the one with the yellow eyes, is the one she keeps an eye out for most.

When a local boy is attacked and killed by the wolves, hunters enter the forest to kill as many of these as they can. Grace is terrified and does her best to stop them, thinking only of her wolf. She fails however and as she gets back to her house, she discovers a wounded boy on her porch, bleeding profusely. He has enigmatic yellow eyes and without thinking about things twice, Grace sets about helping him. She cleans him up and takes him to hospital where they think he, the boy, Sam, tried to commit suicide by shooting himself. They indicate the cut marks on his arms and Grace is stunned by this thought.

They run from the hospital and as Grace and Sam grow closer over a period of weeks, living for a part of that time together in her room, without her flighty parents being aware of it, Grace learns Sam's story. And he tells it without vitriol, without anger. It is soon evident that Sam is not the macho alpha-male a lot of urban fantasy novelists come to rely on, even the ones aimed at the teen audience. He is a different type of hero - the soft-spoken, artistic one who can do silly lyrics in his head, the one who has his nose in books reading about everything. Sam makes an interesting foil in his creativity and expressions to Grace's almost stoic nature in which she just forges ahead, doing her thing, taking care of the household her flaky parents couldn't care about, taking herself off to school, studying, getting good grades. It is also interesting to see how Sam sees Grace - he calls her his Summer girl but to be honest, I think she suits winter a lot me, because of her nature and her ways.

The novel is written from both Sam and Grace's perspectives, in alternating chapters, each chapter indicating the temperature in Mercy Falls at the time. As the weather grows colder, so too does the risk of Sam changing back into a creature that only lives in myths.

The author has worked up a fantastical myth around the werewolves and it works very well in this instance, given the location and the time of year the novel is set in. Because she almost exclusively focusses on Sam and Grace you start feeling a bit claustrophobic and it is reflected in the bad weather which is encroaching, bit by bit, on them as they huddle in their warm cocoon of first love.

There are elements that disturb - the nature of their relationship is very intense and it's not healthy, by any stretch of the imagination, but it works because everything the author has created in this novel, spotlights Sam and Grace's relationship. By islolating these two characters from the rest of the world in such a way, she creates something that is on the cusp of being a wonderful dream and nightmare at the same time.

The secondary characters in the book weave in and out of the story, their own storylines not developed to its full capacity as they are genuinely only there to reflect Sam and Grace's concerns and to give small interludes of reality into this dream world they have created for themselves. I know this may annoy some readers but honestly, it does not detract from Ms. Stiefvater's writing.

And I'd like to mention here that there are parts of this novel that made me think of A Tenderness of Wolves by Stef Penney - no, not storyline or whatever, but the sheer beauty of her writing. It verges on being a literary novel in some places with a paranormal slant and I'd recommend you read Shiver - if not for the story - then definitely for the quality of writing. Am I allowed to say that?!


It is inevitable that Shiver will get itself likened to Twilight. No doubt about it. Yes, there are similarities, but for me, Shiver is more akin to Holly Black's three novels, Tithe, Ironside and Valiant. It also reminds me strongly of Need by Carrie Jones. All these novels are worth their weight in gold and has forged a new market for teens and adults who like YA. I'm happy to count Shiver amongst these titles as something different enough to be given a chance.

I can write more about Shiver - a lot more - but then the author has done that herself and to be honest, if you are a fan of this genre, and you are a teen, you are going to enjoy it. It mixes favourite genres and keeps it fresh: a little bit of paranormal romance, a little bit of magic...oh, and wolves.

I've been snooping and have found a few extra bits to Shiver. This is the book trailer Ms. Stiefvater made for Shiver herself and the one below that is the official book trailer from the States.

Find Maggie Stiefvater's website here. Shiver is published by Scholastic UK on 5th October 09.
Who wrote this? Liz at 9:51 am

Email ThisBlogThis!Share to TwitterShare to FacebookShare to Pinterest
Labels: maggie stiefvater, scholastic, shiver, ya and kids

I've been hearing the writing is beautiful. I'm looking forward to this one, despite the mixed reviews. Love the trailer.