The Hollow by Jessica Verday 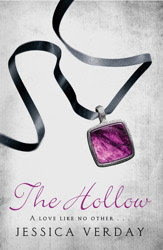 When Abbey’s best friend, Kristen, vanishes at the bridge near Sleepy Hollow Cemetery, everyone else is all too quick to accept that Kristen is dead and rumors fly that her death was no accident. Abbey goes through the motions of mourning her best friend, but privately, she refuses to believe that Kristen is really gone. Then she meets Caspian, the gorgeous and mysterious boy who shows up out of nowhere at Kristen’s funeral, and keeps reappearing in Abbey’s life. Caspian clearly has secrets of his own, but he’s the only person who makes Abbey feel normal again…but also special.

Just when Abbey starts to feel that she might survive all this, she learns a secret that makes her question everything she thought she knew about her best friend. How could Kristen have kept silent about so much? And could this secret have led to her death? As Abbey struggles to understand Kristen’s betrayal, she uncovers a frightening truth that nearly unravels her—one that will challenge her emerging love for Caspian, as well as her own sanity.

Reading The Hollow is like taking a giant bite out of a slice of toast topped with Marmite - you are either going to love it or dislike it.

There are sections in The Hollow which is beautiful, evocative, insightful and almost poetically descriptive and emotive. Then there are sections which I felt strongly jarring because it dampened your expectation of the story.

I came away loving Abbey's voice - she is struggling with feelings of guilt, remorse and betrayal at the death of her friend. They were close, spending a lot of their time together, the type of intimate friendship very young girls can have that means more than family.

I think the author excells in showing Abbey's emotional state and reaction to Kristen's funeral - at first there is no confirmation that she is dead. She's just gone. A tremendous amount of internal dialogue and hidden feelings are dealt with after the funeral. We are shown that Abbey throws herself straight into her hobby, perfume making, and how she plots her future, wanting to open her own perfume business in the town of Sleepy Hollow. We follow her on her visits to the cemetary and to Washington Irving's grave. She is deliciously macabre, tidying graves and talking to the unseen. Her voice works well here and you get to know Abbey very well through her actions and reactions to school and those around her. For all her sadness she comes across as a very together and realistic dreamer you root for. She keeps her sense of humour and she's aware of her surroundings, perhaps hyper-aware. I cheered this courageous girl and read on with gusto, not having a single clue where the book was going to lead but thinking that it's going to be a very cool book indeed.

Then we suddenly get stuck in this mire of very inane minute by minute examinations of what she did every single moment of every single day for an extended period of time. I understand the author could be doing this to create a deeper bond with the character, letting us know her every thought and action, but it doesn't work. I skipped loads here as it geniunely failed to move the story forward and I wanted more conflict and action and get to the kernel of the story to find out what was really going on.

She meets Caspian, the mysterious boy she briefly spoke with at Kristen's house, in the basement, after the funeral. Their relationship is an odd one and becomes one of fascination and apparent love. But Caspian is never fully realised and it becomes a frustrating game of cat and mouse between Abbey and Caspian - will she see him, won't she see him during the course of the day somewhere? I genuinely didn't like the collapsing of Abbey's firm character as soon as Caspian appears. I don't like to call myself feminist I felt that she folded too quickly into a pliable murmurring lovesick creature, obsessing about a boy she knows next to nothing about. It didn't ring true. Caspian was off, she sensed it herself but she fell for him regardless, showing no sign of self-preservation at all. One good thing Caspian brings to her life is the suggestion that there was something odd about Kristen's disappearance and her subsequent death.

Abbey grabs at this with both hands and starts investigating her friend's motives and discovers that the girl she thought she loved as a best friend, witheld secrets from her. Hurt and angry she goes on a rampage to find out more and her investigations reveal that not everything is as they seem. But although there are only mentions of what's going on, the ending of the novel comes as a slap in the face - yes there is a twist in the tale, there had to be, but dammit, there had to be more because so very many questions are left unanswered. I appreciate that this is part of a series, and to be honest, I don't mind waiting to have questions answered but I don't like - as a reader - being led up one path, only to have the main character turn around and do something completely different to expectations. It makes for a wow-factor and I'll be honest, I liked the book more for it, but it still left me feeling a bit flat.

As I said, definitely a Marmite book. There is a lot of win in The Hollow but there is also a lot of lose. There are readers who are going to irrevocably love The Hollow and I can see why, but I won't be one of them in this instance. I will however be reading the next books because I want to know what happens to Abbey and what the mysteries revealed really mean. Jessica Verday has a lot of talent, it definitely shows, and I think we've got the makings of a very good YA author here, we've just got to be patient as I think the rest of the series will be ratcheting up the stakes.
Find Jessica Verday's website here. The Hollow is released on 1st October by Simon & Schuster here in the UK.
Who wrote this? Liz at 9:58 am

The Marmite thing is perfect! And I completely agree with every single thing you say including how much potential the author has.

I'm reading this book right now (so I carefully read your review... and skipped bits... I'm so afraid of spoilers!). I'm having a hard time with this one. I'm bored silly, and I wish the story would go somewhere. I'm almost halfway through the book, so that's not a good thing.

Nice review. I haven't read this yet, but I've heard mixed opinions.