The Forest of Hands and Teeth - Carrie Ryan 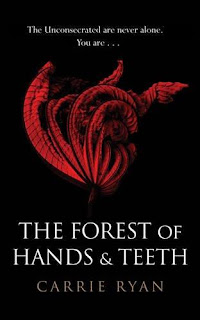 In Mary's world there are simple truths.

The Guardians will protect and serve.

The Unconsecrated will never relent.

But, slowly, Mary's truths are failing her. She's learning things she never wanted to know about the Sisterhood and its secrets, and the Guardians and their power, and about the Unconsecrated and their relentlessness. When the fence is breached and her world is thrown into chaos, she must choose between her village and her future-between the one she loves and the one who loves her.

And she must face the truth about the Forest of Hands and Teeth. Could there be life outside a world surrounded in so much death?

Liz read this little gem a while back, and it had been winking at me from the shelf for far too long, so when I found myself sans book in hand and in need of a fix of Z, it fell into my hand..

In Forest we meet Mary, a young girl just reaching marrying age in the Village. The village lies behind guarded fences, fences that protect them from the zombie horde beyond, a horde they call the Unconsecrated.

The Sisterhood, self appointed guardians of the village, are a secretive order of nuns who manipulate and bully their charges to maintain the status quo of the village for the sake of the greater good. Their influence stains the pages with a quietly menacing claustrophobia, creating a distinct and memorable feel for the village and an immediate empathy for Mary.

The expected pattern of Mary’s life is turned upside down early on when her mother succumbs to a moment of madness and is infected. With the blame shifted to her, Mary finds herself with little choice but to entertain the possibility of a life within the sisterhood, relinquishing her unrequited love for Travis, something her inquisitive and impetuous nature chafes against.

Hints of the sisterhood’s secrets and life beyond the village vie for her attention as she cares for the injured Travis. However, zombies are an implacable enemy and when the inevitable happens, it’s the start of a desperate flight for survival.

While the threat posed by the zombies is constant and well described, Mary’s warring emotions, stoked by their ever-present threat and the proximity of Travis, are the predominant theme and, while she remained a sympathetic character, it did chafe at times. But maybe that's just me.

All in though, I enjoyed it. It’s a well written, engaging and fresh perspective on the increasingly popular Zombie Apocalypse scenario, with the characters fully immersed in an enigmatic and unravelling world, plenty of gnashing zombies (who remain threatening throughout) and a fair sprinkling of pleasing decapitations, the sudden violence surrounding them all the more shocking for the interludes of relative quiet and introspection.
Who wrote this? Mark at 10:18 pm

Email ThisBlogThis!Share to TwitterShare to FacebookShare to Pinterest
Labels: carrie ryan, Orion, The Forest of Hands and Teeth, Zombies

This book scared the ever loving crap out of me. Don't read it alone at night.
I hate zombies!!

Here’s my Tuesday Teaser, and review of the book if you fancy taking a look!

Btw, you have an award to pick up on my blog!

Fast ones, slow ones, rotting ones, lurchers, twitchers, shamblers, grabbers, gnawers.. they're all winners in my book!

I like the mysteries in the story, that not everything is explained, and that there are unanswered questions. Let's face it - that's the way life is. ... and we certainly don't understand how things really were in the generations previous to ours, just as Mary and the other villagers don't really know what life was like before the Return. I really liked that the author didn't spell out that it's a zombie book - you figure it out along the way, but it doesn't scream "zombies".

I agree with the other reviewers that the main character, Mary, is selfish and annoying, and I also didn't quite understand why the two brothers loved her more than her friend Cassandra, who seemed to be a much more likeable character (what little we saw of her). But I also understand that Mary is a teenager... and teenagers typically question everything, and her way of dealing with the loss of her family and her life is to yearn - with a single-minded determination - for something that may or may not exist.