Dear readers and fellow bloggers from the sphere, Mark and I got to attend the very swanky Gollancz party this year. We were joined by Ana from The Booksmugglers and Gav from Nextread. Needless to say there was a lot of squealing and "ohmygodwhatamIgoingtowear" before the time because you know, the nearer we got to the date of the party, realisation dawned: a truckload of authors are going to be there whom we are all slavish fans of. (And we all had to look purty). Then we realised they will be joined by editors, reviewers, publicity people, journalists, other publishers and their media teams. It was going to be HUGE.
And it was - there were hundreds of people. The venue was the Oktober Galleries in Bloomsbury which were a series of rooms and a lovely outdoors garden. We mingled our way around and to be honest, the amount of people I recognised by name alone was staggering. The worst part was being unable to talk to all of them.
A definite highlight for me was catching up with James Lovegrove whose novel, Age of Ra, taught me not to turn my nose up at military sci fi! I owe James a long email and he in turn owes us a blogpost (hurrah!).

Further along we got to meet up with the luscious Alex Bell who seems set on outshining everyone because not only is she tall, very pretty and sexy, she has the dress-sense of fashionista. Check out this amazing shirt! Isn't it gorgeous? And angel wings, as we all know are very topical right now.
We got to hang around with one of my favourite people of all time - Saxon Bullock - who looked extremely suave in a velvet jacket and goatee. Saxon has this infectious air and a personality that hinges on the hysterical that has everyone falling around laughing. I think I may need eyecream for all the laughing wrinkles I got on Thursday night.

It would be bad of me not to mention the talented Ms. Suzanne McLeod who looked rock 'n roll. We didn't get a chance to chat loads, but I got to whisper some confidences to her very briefly before she shot off home. When we saw the tiny group of authors arrive I also spotted this tall chap in a purple shirt who looked a bit out, a little bit like Leonardo Di Caprio if Leonardo was actually six foot tall and had broad shoulders. I asked Alex who he was and it turns out he's a new author signed by Gollancz, called Sam Sykes. I've failed to find a website for Sykes. We did however corner him at the party - yes, me, Mark, Ana and Gav - to have him tell us about his upcoming book and people, all I can say is...2010 is going to be an awesome year.
Ana and I are particularly excited about the upcoming books from Gollancz - we are going to see authors like Nailini Singh and Caitlin Kittredge come to the UK as part of their urban fantasy / paranormal romance lines they are establishing. This, needless to say, had us fanning ourselves in utter joy.
We got to spend some time with the girls from Orbit: Sam, Rose, Coreen and Ana - who, all by the way, can take Paris by storm with their fashion sense! We were enticed about Blue Blood by Melissa de la Cruz and I for one cannot WAIT to read this series. Rose and I also discovered a shared passion for Kelley Armstrong, Dean from Supernatural and a variety of other things I'm not allowed to mention on here because it could be held against us in a court of law.
I got to chat to John Berlyne who runs the Zeno Agency - I also review for John over at http://www.sfrevu.com/ where he is the UK editor. They've had some amazing authors sign with them lately and sold books most recently to both Gollancz and Angry Robot. *sparkly eyes* More pretty books to read!
I also - yay! - got to chat with another legendary John - John Jarrold of the John Jarrold Literary Agency. It was brief only but after chatting to John on and off for about 2 years now, it was fantastic to actually get to meet him in person.
Ana and Gav met the amazing Robert Holdstock for the first time. A nicer, kinder and gentlemanly man is hard to find. I still do fan-girl squealing about him though - my autograph I got from him at the Gemmell Award is still a favourite treasure.
We got to meet some of the girls over at Voyager too - we've all been twittering incessantly for ages now so it was good to be able to put faces to Twitter names. Also a shoutout to the tallest guy at the party, 6ft 6inches Niall Harrison who is not only a cool guy but also a new friend. 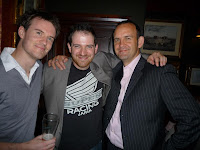 Mark managed to get hold of Joe Abercrombie for part of the evening at the after party and coerced him into posing for a picture or two. I think Mark and Joe are a very dangerous combination and I'm a bit relieved that they managed to break away from one another. I had visions of some kind of creative collaboration in which more bloodshed and zombies would abound than you could shake your boomstick at.
My one regret of the evening is not being able to talk to MD Lachlan, a new author signed by Gollancz. His book is called Wolfsangel and we've met up and chatted on Twitter a few times. I really wanted to congratulate him in person but sadly, not this time around.
There is loads more to say about the party but to be honest, I'm still recovering. It was an amazing evening and we all had a tremendous time. Thank you to Jon and everyone at Gollancz for inviting us around. We all had a fantastic time!
Who wrote this? Liz at 10:39 am

You can't see it but this is my green with envy face!

great write up Liz! thank you! Glad you enjoyed it and I'm almost jealous I was working it so didn't get to chat to virutally anyone at the event!

Was great you could make it along and talk Gollancz up so well!

Also a shoutout to the tallest guy at the party, 6ft 6inches Niall Harrison

Good to meet you, too, though I have to confess that I wasn't the tallest man there -- Geoff Ryman has me beat by a couple of inches.

Sounds fantastic! There are so many books that I'm looking forward to in 2010.

It was a fine pleasure meeting both of you (as opposed to an awful pleasure) and I'm quite thrilled you think I'm tall, though I am almost inclined to take offense to being compared to that dude.

I'm sorry to inform you I have no website yet, but once I get one, it is guaranteed to (metaphorically) punch you in the face and (physically) assault your senses...with quality.

So pleased to meet you and I do hope to see you again next time!

Liz - it was great to (briefly) meet you on Thursday evening. Sorry that I got pulled away mid-way through our conversation and never made it back again! Very rude of me...

Glad you enjoyed the evening.