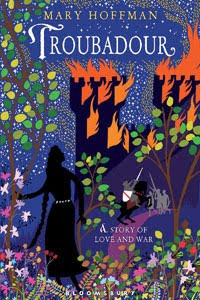 A story of persecution and poetry, love and war set in 13th-century Southern France. A troubadour, Bertran, witnesses the brutal murder of the Pope’s legate, and risks his life to warn others of the war that he knows is certain to follow this act. The lands of the peaceable Cathars – deemed heretics – are now forfeit and under threat from crusaders who have been given authority by the Pope to take the Cathar domains by force. But the Pope is trying to track Bertran down and so is somebody else: Elinor, a young noblewoman, in love with Bertran but facing a loveless arranged marriage, flees her family and becomes a minstrel herself. Soon both Bertran and Elinor find themselves enveloped in a rising tide of bloodshed that threatens the very fabric of their society.

There is such a fine line between writing a successful novel (adult or children's) in which the political machinations are prominent, almost a character of their own. Politics can throw the book into either "so dull I'd rather stab myself" or "wow, this stuff seriously happened, I need to know more" category.

Because of her impressive skill, Troubadour by Mary Hoffman, falls in this latter category. Set against the very tumultuous background of the crusade against the Cathars (known as the Albigensian Crusade) the story sweeps us up and carries us several years past the truly horrific main events of the crusade.

Splitting the narrative between Betran and the lovely Elinor is a very clever well to produce a comprehensive plot and story. Through Betran, whom I have to admit is a tragically beautiful figure embodying the quintesencial Romance figure from medieval times, we come to see the horrors of war. He is the bringer of bad tidings, as a troubadour and Cathar he foresees the terrible events coming and knows he has to do something about it. He rides all over the South of France to warn others of the religion to be be aware of the Pope's fury at the death of his Legate. Few listen, most do not believe that war will come, even fewer still believe that the north will invade the south.

In Elinor we have a lovely awkward, highly intelligent and amusing heroine. She is bitterly young but her parents want to see her married off - firstly, because it is how things are done and secondly, they suspect she would be safer away from the region. But Elinor has other plans. Disguising herself as a boy and taking up the mantle as a minstrel, she leaves her parent's keep to travel the countryside as part of a travelling group of minstrels. For most of this journey Elinor sees the world through rose tinted eyes. We see the people, the countryside and the politics as it once was - not perfect, but definitely not too bad either.

She is also deeply in love with Betran and although her affections aren't returned immediately, he is the type to be considerate and sweet about it. She has the idea that one day in the far future, they would meet up and become married perhaps. I loved the very slender strands of romance throughout the novel. It never felt forced and it never overshadowed the true story - those of the survivors of this awful genocide committed by their own people.

I'm inclined to say from an aspiring writer's point of view, the plotting left me speechless, as did the overall story, packing a tremendous punch. She's managed to tackle a tangled plot of politics and history during an awful time in the world's history and she keeps it all together, turning it into an engaging story that you wish you had the skill and power to write.

As a reviewer I can only applaud Ms. Hoffman's skill as a writer. Your attention never drifts. Her writing is tight and you genuinely irrevocably like the characters and in your heart of hearts you wish them well, you wish Elinor and Bertran a happily ever after.

As a reader I appreciated Troubadour as a well written engaging story which I definitely will be rereading in the near future. I would love to see this as a movie - it would film so well. It is understated, beautiful, remarkable and haunting. Take my word for this: novels written with this type of attention to detail is a rarity.

Just a note: this has been published by Bloomsbury as one of their children's novels BUT I would love to point out that adults would love this too. It will definitely be going onto the upcoming MFB Christmas Presents Suggestion List.

Now, a mini-competition: I'm keeping hold of my slightly mangled proof of Troubadour, but I am prepared to give away the hardback I received - in a competition open to UK residents only. Email us to the usual address with "Troubadour" in the subject line and I'll draw a winner next week, 30th September.

Thanks for the review.

I hadn't even heard of this one, but I've loved the Mary Hoffman books that I've read.

I love the sound of this book! Thanks for the review.
I've emailed my competition entry.
Thanks.
Carole