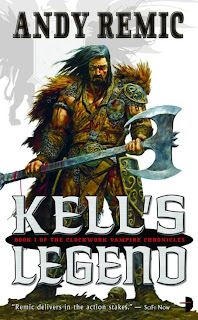 They came from the north, and the city fell.
It is a time for warriors, a time for heroes.
Kell’s axe howls out for blood.

I was quite looking forward to Kell’s, given that to date my only experience of Andy has been via the SF platform. I had made sure I didn’t hear or see anything that could colour the experience and dived straight in, emerging a couple of days later- with a grin on my face.

Kell’s starts with a flurry of violence, presaging the bodycount to follow, the lion’s share of which belong to the titular hero and his thirsting axe. Kell’s a surly, complex character whose dark, whisky tainted history is hinted at throughout but only revealed in tantalising morsels. But he’s ably assisted by a cast of supporting characters who are equally engaging and interesting -and almost as deadly.

And they need to be- the array of enemies that populate their world certainly are. Between the army of black clad albinos, fey killers, the bestial mutants and a race of clockwork vampires whose undeniably feral and bloodthirsty nature lurks beneath a thin veneer of civilisation they'll need every ounce of ferocity they can muster.

Let’s face it, in a world where your primary line of defense is a sword or axe, things are going to get messy in short order. Andy’s acknowledged this and has delivered an engaging, fast paced cocktail of violence and intrigue that grabs you right from the outset and doesn’t let go until you run out of pages.

Kell's Legend is the first book of the Vampire Chronicles and is out now.

Dan who? The Lost what? Nevermind all that. Buy this instead!
Who wrote this? Mark at 12:03 am

A Question Of ITIL said...

Great book!
Did you know that his new omnibus has just been published?
Upcoming4.me Clockwork Vampire Chronicles Omnibus