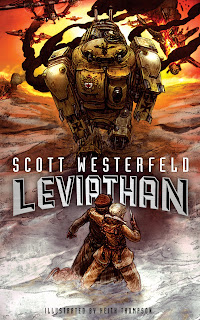 Prince Aleksander, would-be heir to the Austro-Hungarian throne, is on the run. His own people have turned on him. His title is worthless. All he has is a battletorn war machine and a loyal crew of men.

Deryn Sharp is a commoner, disguised as a boy in the British Air Service. She’s a brilliant airman. But her secret is in constant danger of being discovered.

With World War I brewing, Alek and Deryn’s paths cross in the most unexpected way…taking them on a fantastical, around-the-world adventure that will change both their lives forever.

Initially seduced by the cover art and Keith Thompson’s evocative sketches, I was firmly hooked by the premise of an alternate history that has the lines drawn not only along national boundaries but by two starkly different technological ideologies.

On one side stands the Clankers, whose war machines are armoured, mechanical contraptions, bristling with cannons and machine guns and striding across the battlefield with their engines and cogs whirring, their exhausts belching black smoke.

On the other, the Darwinists, who breed living weapons and war machines to do their bidding, from message carrying lizards to biplane hunting hawks and sentient zeppelins.

Leviathan is wonderfully easy to get into; the characters are quirky, intelligent and immediately likeable, and Scott rapidly immerses you in their world. It’s a cleverly constructed world, one that is both familiar and alien; it’s a tricky balance to maintain, but it’s one that he nonetheless achieves, making the suspension of disbelief a no brainer.

While Aleksander and Deryn’s stories are destined to collide, by the time they do you have a very clear picture of their individual characters, each of whom stands out in their own right. It’s during that collision that Scott shines, letting the gulf in their upbringing and culture colour their relationship and their reactions, while subtly adding depth to world around them.
Leviathan is fresh, exciting and eminently readable. Plus it’s got divebombing bats that vomit steel darts and steampunky Mechwarriors clomping across the landscape! Awesome in anyone's book. Plus it's the first of a trilogy, so we have another 2 instalments to look forward to, with the next being Behemoth (due October 2010!).

Don’t be fooled by the 'young adult' label, this should be on everyone’s reading list, regardless of age.

You can read an excerpt here and watch the trailer here. 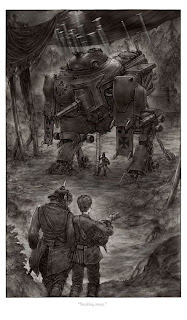 Great review Mark! The book is on my list. I love steampunk.
But I have one question. Amazon and Book Depository show a completely different cover compared the one in your post.
Where did you get the image from?

Our cover is the UK cover - Leviathan's been published both sides of the Atlantic with slightly different covers.