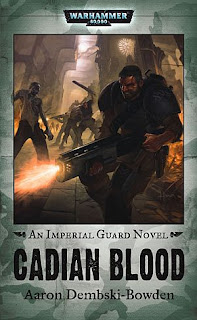 When the Imperial shrine world of Kathur is blighted by Chaos, the brave Guardsmen of Cadia are sent to reclaim it. The plague of Nurgle has set in deeply on the planet, forcing the Cadians into battle with an innumerable legion of the infected. In the midst of battle, Captain Parmenion Thade is thrust into an unlikely commanding role. Yet, he cannot imagine what lies ahead on Kathur, and just how important it will be to ensure victory there…

And the best part is, it does exactly what it says on the tin. Right from the start, there’s a feeling of ‘this is going to get ugly’, and it soon does, in a blissful chorus of las guns and tumbling plague victims.

Stepping aside from the corpse shredding action sequences, Cadian Blood is lifted by the enigma of what lies at the epicentre of the apocalyptic plague that has reduced a thriving shrine world to an infected nest of violence and death. There’s a palpable escalation in the tension, and the taut pace never slackens as Captain Thade and his men inch closer to the horror at the centre of the web, their new Commissar’s watchful eye and trigger finger a threat as real as the enemies who seek to despoil their flesh.

Aaron’s served up a generous portion of 40K action, with an unashamedly bulging side order of bloody fun. These are Imperial Guard –infantry, not Space Marines, and their determination to stand by Thade and not let their brothers down in the face of the insanity that confronts them is nothing short of heroic, and Aaron does this esprit de corps justice.

It’s well paced, thoroughly entertaining and sitting neatly on my shelf, it’s new home.
Who wrote this? Mark at 1:00 pm