I met the amazing Fiona J Mackenzie online on Twitter and after much chatting to and fro, offered her a book to read as she was at a bit of a impasse on what to read. I had a bit of an excess and sent her a copy of one of the newly published book by Jim Kelly (Penguin), Death Wore White. And then she went and surprised me with a review which I am hugely grateful for!

I am hoping, like Tina and Amber that Fi will be able to make regular guest appearances on MFB blog as a) it's always nice to have someone new stopping by and b) she's an author and therefore her reviews are a lot more techinical and concise than mine, for instance, so it is a tremendous learning curve for me to indulge in reading her work.
Without further mutterings from me, the review for Jim Kelly's Death Wore White: 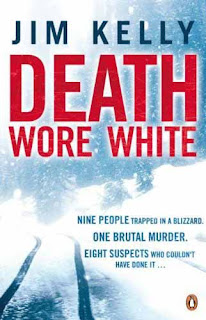 At 5.15 p.m. Harvey Ellis was trapped – stranded in a line of eight cars by a blizzard on a Norfolk coast road.

At 8.15 p.m. Harvey Ellis was dead – viciously stabbed at the wheel of his truck.

And his killer has achieved the impossible: striking without being seen, and without leaving a single footprint in the snow . . .

For DI Peter Shaw and DS George Valentine it’s only the start of an infuriating investigation. The crime scene is melting, the murderer has vanished, the witnesses are dropping like flies. And the body count is on the rise . . .

A blizzard rages on the Norfolk coast and eight cars are trapped in deep snow on a country road. In the lead vehicle the driver has been brutally murdered, there are no footprints in the snow and at the same time within half a mile of the stranded vehicles another dead man is washed ashore.

It is bitter cold, but that’s not the only bitterness in the air. Detective Inspector Peter Shaw, a ‘whiz-kid with the fancy degree’ and veteran copper Detective Sergeant George Valentine are ‘West Norfolk Constabulary’s latest investigative duo’. They have been paired up for just one week by ‘some joker in admin. …who knew the past and didn’t care about the future.’

Trouble is, Shaw and Valentine share a history; there’s a ten-year-old cold case that resulted in the disgrace of Shaw’s father and the demotion of Valentine ‘a man whose career trajectory looked like a brick falling to earth.’ Now Valentine has to come to terms with the younger man giving the orders.

Many questions arise from the two deaths, not least of all is whether there is a link between the two victims, and Shaw and Valentine have to battle against more than the Norfolk winter to find the answers. There is a complex cast of characters, each with their own agenda. Subtle clues are thrown up in a steady and accomplished way as the ingenious plot unfolds and all the while the cold case festers in the background.

Death Wore White is a traditional ‘whodunnit’ but with a contemporary update to the ‘locked room mystery’. The crime scene of the trapped cars means that the murder has been committed under apparently impossible circumstances and the murderer seems to have vanished into thin air. Suspects, motives and opportunities ebb and flow throughout the narrative like the Norfolk tides.

Written with a keen eye for detail the central characters are well defined, as is the bleak backdrop of an icy winter in Kings Lynn. The plot has plenty of twists and turns, not to mention more bodies, along the way. Unlike many fast and furious mystery novels, the style of writing has more depth and breadth and flickers with descriptive passages, similes and metaphors, occasionally at a slight cost of pace.

It is thoroughly researched, well written and with enough puzzles to demand the attention of the reader.

Jim Kelly’s earlier Philip Dryden series was awarded the 2006 CWA Dagger in the Library Award for producing a body of work greatly enjoyed by fans of the genre.

Death Wore White, about which Kelly says ‘I hope that I have captured the genuine spirit of detection,’ is the first in a new series featuring DI Peter Shaw (who was first introduced in Kelly’s previous Dryden book ‘The Skeleton Man’) and DS George Valentine. Fear not, with writers like Jim Kelly around the ‘spirit of detection’ is in safe hands.

Find author Jim Kelly's website here. And find our lovely reviewer, talented author and inspiration, Fiona McKenzie's website here. Can I just say how much I love this paragraph from her bio:
My default mode is shallow and frivolous, happily distracted by anything girlie; fashion, handbags, shoes, perfume, cosmetics and fresh flowers. I have elements of OCD but my desk is a mess. Go figure. Traces of geek manifest in my adoration of all things Apple. Did I mention shoes?
Who wrote this? Liz at 1:19 pm

Awesome review. You are quite right Liz, there is a lot to be learnt from reading Fiona's review, and not just about the book in question.