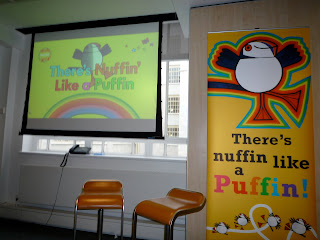 I was very fortunate to have been invited to attend the Puffin Media event earlier this month at Penguin HQ on the Strand.
I met up with Jenny from Wondrous Reads - for support in all thing booky, of course - and we headed to PHQ at twelve for the presentation.
We were met by the very gracious (if nervous) Hannah and Tania of Puffin who welcomed us graciously and ushered us into the board room where loads of chairs and screens were set up for the presentation. As I know how rubbish I am trying to take photos from behind someone's head, I nabbed us seats right at the front, in the centre. A bit forward but hey, we got there early, and we had an unobstructed view of events.
As Francesca Dow welcomed all of us lucky folk, I was struck by how well attended this function was. Then I settled in to take loads of photos and make notes on the handily provided presentation handouts we were all given.
Francesca gave us a brief overview on how well Penguin did overall last year, which is so good to hear in these dire times where everyone seems to be struggling. She praised her colleagues and the support from their authors and customers who came through in 2009 to make it a very memorable year indeed.
Francesca told us that Puffin will be focussing their strategy across three main sections for 2010 and the future: Cross-over books, the creation of recognisable brands and the trotting out of revamped classics. 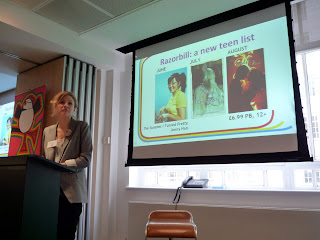 Next we were given some amazing information: Razorbill which used to be an imprint of Penguin USA is now part of Puffin UK. This means combined buying power for Razorbill when it comes to the YA market...this also means that Puffin will be looking to acquire strong YA from UK authors. (I danced like a crazy thing in my seat when I heard this.)
Next we were shown some slides for the 8 - 12 age group - and they pointed out that there is such a big gap in the market for writing for girls in this age group because everyone seems keen to write YA.
The speakers touched briefly on Puffin Baby and how they are keen to grow this section too, but as usual their standards are very high when it comes to this and picture books, so they can literally skim the best of the crop of those that approach them with ideas.
In May of this year Puffin will be launching a really cool idea: Pocket Money Puffins - smaller books retailing at £3.99 for ages 5 - 12+, suitable for those strapped for cash. Amongst the titles mentioned are books by authors like: Charlie Higson, Meg Rosoff and Cathy Cassidy.
In June Puffin will launch their search for books of the decade - a fantastic concept and I'm pretty sure MFB will be bringing you MORE news about that later on this year. The digital archive website for Puffin will go live this June too - www.puffin.co.uk - and they will be relaunching the We Make Stories website - www.wemakestories.com. There will also be Puffin parties all around the UK in various bookstores, schools and libraries.
Next we got to talk about the vastly cool Diary of a Wimpy Kid books. More and more are being sold, they are good fun, transcending age groups and a movie is underway. -woot- I think we have most of these as Mark's a big fan. I'll make some fire under him and get him to review it for us.
I freaked out a little bit because I'm a big Rick Riordan / Percy Jackson fan and we got to watch an extended clip of the trailer for the upcoming movie: Percy Jackson and The Lighting Thief. It looks simply amazing. My jaw hung open. I really want to see this flick so much! We have some more titles coming from Mr. Riordan in May - The Kane Chronicles: The Red Pyramid and it looks grand. Also new series called Camp Halfblood - more about Greek Gods but not focussing on Percy.
A new Eoin Colfer is coming in July - the new Artemis Fowl - The Atlantis Complex. Eoin did an intro via video for us about it and let me just say: it sounds utterly over the top, hilarious and good fun. 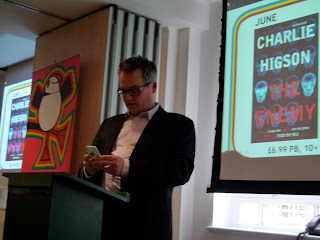 Charlie Higson stepped up the podium, whilst Twittering. If you're on twitter, make sure to follow him! He's @monstroso. Charlie chatted to us about what he's up to and what we can / shouldn't expect from his follow-up novel to The Enemy called The Dead. It sounds intriguing...but then you just never know with Mr. H - full of surprises! 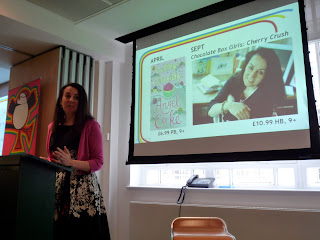 Cathy Cassidy came on to talk to us about her books, her fans and how sad she is that children and adults no longer dream. Society no longer allows us to daydream. The dreamers get ostracised and called bad names. And then they usually conform to the norm and they lose their talents and creativity and I actually felt quite emotional after her talk and sniffled into a tissue because what she was saying struck such a chord. I vow never to stop daydreaming! I also met with her briefly afterwards and got her to sign my autograph book. 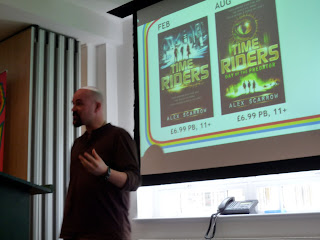 The talented and rather dashing Alex Scarrow was up next, chatting about Time Riders (which I've read part of) and what he's planning for the second novel. I can't wait to finish what I've read and hopefully run an interview and competition as not only is what I've read well written, the whole concept is just brilliant. And Alex is a cool guy and I can only imagine chatting to him for an interview.
We were shown some slides featuring the gorgeous Richelle Mead's Vampire Academy which is doing really well in the UK. Richelle will be visiting the UK shortly - squeal! - and I'll make sure to get info onto the blog asap. We also got the chance to ogle the UK cover for Sarwat Chadda's second novel: Dark Goddess, the sequel to Devil's Kiss. Staying with the teen theme we heard about other titles such as Beautiful Creatures by Kami Garcia and Margaret Stohl, and Sarah Dessen's newest Along for the Ride.
We got told in depth about Razordbill and some of the launch titles here in the UK: The Summer I turned pretty by Jenny Han and The Other Countess by Eve Edwards. I'm excited about this new imprint for Penguin. They have got a keen eye for talent and it means that we get to read some excellent new authors. It also means that new authors have a new avenue to being printed. It's incredibly exciting and I personally wish Puffin very well with Razorbill.
The talk slowly wound down as various peeps talked about picture books and how they are revamping some older vintage books, updating it to make it more relevant and also looking around for new, funky and fun books. 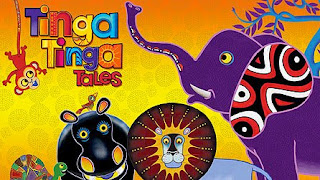 After the presentation we all got to mingle and chat. I got to say "hey" to Rebecca who looks after character picture books such as Charlie and Lola and the new CBBies Tinga Tinga Tales which I'm excited about - stories from Africa peeps! How can it not be cool?
We got to talk to various editors and marketing people after the presentation and we made sure to thank them and praise them for an excellent event. I loved being part of this and admire Penguin for being forward thinking and so focussed on bringing excellent writing and authors to their readers. Being part of helping them do that is so - well, for a lack of a better word - cool.
Thanks for inviting MFB along, Puffin peeps! We had a blast and we're looking forward to indulging in all the lovely books for 2010! 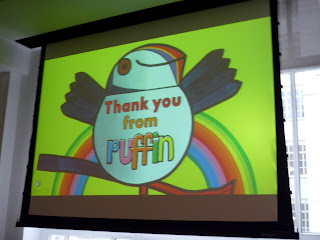 Wow Liz, what an in-depth report! I still haven't written mine yet, but I think you remember more than me. lol. I'll link to here when I eventually post mine, so people can ogle your author pics.

And once again can I say: I love Puffin!!

It's cos I made notes! :-) Have learned my lesson.

Thanks for the upcoming link - we will RULE the blogosphere!

Great report Liz - just wish I could have been there as well. Maybe next time! Some really exciting info from Puffin - 2010 is going to be a bog year for them.

Okay, seriously jealous now! Such a great thing to get invited to.

Great report - thank you very much! I love the pictures, too.

I was there, too, but preferred the seat at the back. So much better for tripping up unsuspecting authors.

Thank you for blogging about this event - I had to turn down my invite, so I'm glad to learn what happened in it. I love Puffin too!

Blimey. Never been called that before. I l-o-o-o-ove this blog.

He he. Alex's comment made me chuckle. I am going to be having a special Puffin week in May at school in the library. I'm making a big Puffin logo out of tissue paper. Sometimes my job is pure fun. Great post Liz.