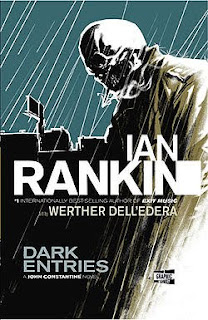 Synopsis:
Occult detective John Constantine has seen his share of strange things in his career, but nothing could prepare him for the horrors of…reality television. "Haunted Mansion" is currently the hottest show on tv, but when the macabre house actually starts attacking the contestants, Constantine is hired to be the ultimate mole. Locked inside with a cast of wannabe-celebrities, his every move being monitored by a deadly figure from his past, Constantine must figure out who (or what) is pulling the strings before he gets cancelled—permanently.

I chose this as my first graphic novel review for 2010. Needless to say I am pleased that I did. More than Mr. Rankin's writing, I took to Werther's illustrative style. I like to say I enjoy graphic novels but the fact that I don't read enough of them makes me a liar. I'm a visual reader, especially when it comes to reading standard novels, no matter the genre. I enjoy scene setting and imagining how it pans out in my head. Werther's artwork throughout Dark Entries is a showcase of someone who "got" Ian Rankin's storyline for Constantine. It could have gone a whole different way, with lurid splashes and severe close-ups, but instead we have tightly controlled bit of art, revealing much of Rankin's story, without it being repetitive. A good combination.

The story is one of those odd ones where even before you get to the guy who has broken into Constantine's house to offer him a deal he can't refuse, you know the brown stuff's going to hit the fan in a spectacularly Constantine way.

Constantine gets coerced into walking into the "Haunted Mansion" reality tv show as a fellow participant, after the producer reveals that something odd was going on and for a change, they had nothing to do with the visions and nightmares the contestants were experiencing.

The reveal is handled well enough - I felt disappointed that the characters didn't show a lot more reaction than they did - but then, I suppose from their point of view, and what they've been going through, anything can happen and it does. On levels that Constantine and the tv producers couldn't begin to predict, even if they were the masters of the chaos that ensues.

Rankin plays heavily on Constantine's lost cause/damsel in distress attributes and I felt a little manipulated by this. Although I mentioned above that I don't read far enough comics / GN, I do my Constantine and I felt that his portrayal by Mr. R just didn't ring true. It's only once Constantine faces what's really going on that you see the other side of him, the guy who can gilbly say: No one fucks with John Constantine, and you believe it, that the stakes are upped and you realise the game is now really afoot.

Dark Entries is for mature audiences so if you're offended by swearing look away...now! 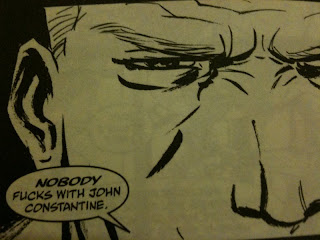 Note: this was snipped with iphone from the GN with no intention other than to illustrate this line's cool-factor.
Dark Entries is part of a new sub-imprint called Vertigo Crime from DC Comics. It is available in all good book stores and online.
Who wrote this? Liz at 8:56 am

Vertigo is always good for some kickass comics. Thanks for the rec.

Nice review. this sounds really interesting. i do love the premise and think I should read more graphic novels too.

I love the sound of this book, will definately be taking a look. I wish grahic novels weren't so pricey, will have to see if they have it in the library.