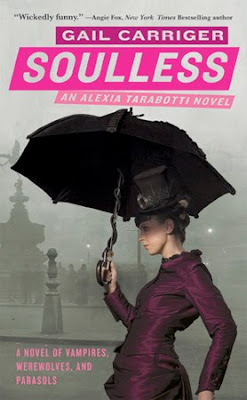 Here is the synopsis from amazon:
Alexia Tarabotti is laboring under a great many social tribulations. First, she has no soul. Second, she's a spinster whose father is both Italian and dead. Third, she was rudely attacked by a vampire, breaking all standards of social etiquette.
Where to go from there? From bad to worse apparently, for Alexia accidentally kills the vampire -- and then the appalling Lord Maccon (loud, messy, gorgeous, and werewolf) is sent by Queen Victoria to investigate.
With unexpected vampires appearing and expected vampires disappearing, everyone seems to believe Alexia responsible. Can she figure out what is actually happening to London's high society? Will her soulless ability to negate supernatural powers prove useful or just plain embarrassing? Finally, who is the real enemy, and do they have treacle tart?
SOULLESS is a comedy of manners set in Victorian London: full of werewolves, vampires, dirigibles, and tea-drinking.

Here’s the most important bit of the review:

GO BUY AND READ THIS BOOK! It is supercalifragilisticexpialidocious!

And here are a few more details:

I LOVE this book! Yes, I know I keep saying that about most of the books I review, but if I had a ‘Best of 2010’ list “Soulless” would be on it for sure. I cannot remember when I have had such a big, fat grin on my face for the entirety of the book.

After being attacked by a mannerless vampire and, having to defend herself, actually killing him, Miss Alexia Tarabotti is thrown into the middle of the London supernatural world. Rove vampires and packless werewolves are disappearing in London and the surrounding areas, she's invited to meet the Westminster vampire hive queen and who is that pesky creature constantly trying to abduct Alexia?

Alexia is the typical bluestocking, intelligent and outspoken. Her inner musings have made me laugh out loud more than once while reading and her interaction with the brash, overbearing, and, worst of all, Scottish Lord Maccon had me in stitches.

Gail Carriger has created a fabulous Victorian London and her characters are well developed, totally off the wall and still so believable. More than once I sat back amazed at what Gail created. Her dialogue is witty and funny, the whole story has an energy and a pace that I thoroughly enjoyed.
I love this fantastic mixture of mystery, action, romance and steampunk. Everything fits together seamlessly and should you be in the unfortunate situation that you have to stop reading because your lunch break is over, you’ll be waiting with eager anticipation to get back to the book.

Soulless is published by Orbit and Gail’s website is here. The sequel “Changeless” will be out at the beginning of April and I cannot wait!*taps her foot a few times* Is it April yet?
Who wrote this? Tina at 3:24 am

I so want to read this! it looks fandangledly amazing.

This sounds like my genre!
I've bought a copy.

lol. I'm not a big vampire/werewolf fan. I've really only enjoyed Twilight and Tantalize in that genre. But you've made me want to read Soulless. I really liked your review. I could feel your excitement. is that weird? =)

It does have a fantastic cover. I've tried to put this on order at the library, but they don't have it yet. It may be time to crack open the Christmas Book Tokens!

Liz, you have been so exuberant That you wrote Cail instead of Gail in your post header ;-)

Thanks Edi! I've amended the post. Tina blogged this one from Canada for us!

Aimee, it is as fantastic as it looks.

Rachel, yeah!*bites her fingers nervously* I just hope you like it as much as I did;D.

Nadine, I'm glad my excitement shone through. I didn't shut up about Soulless at work the day I started to read. I was so taken with the book and it lived up to all my expectations!!

Elen, I'd say this definitely warrents the book tokens. Have a quick read and see if you're not taken with it.

Edi, thanks for pointing out my mistake. My spelling is rather atrocious...

Hi! Thanks for such an adorably bouncy review. I'm charmed.
~ Gail

I am definitely going to be reading this one. Keep hearing such good things about Soulless