Wow, it's been ages since I've posted a review. As much as I would've liked to, I wasn't kidnapped by aliens (hunky space pirate anybody;D), I've been incredibly busy with my new job and moving into my new flat. I was also without internet access for a considerable time. I apologise.

Here is a goal for 2010: I will post a review every Friday (they may just be a little bit on the short side;D)! Well, it will be Friday for me and Saturday for you UK people. 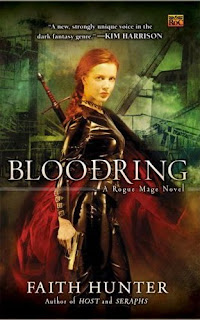 Here is the synopsis of Bloodring from Faith Hunter's website:

In a novel filled with exhilarating action and lush imagery, Faith Hunter portrays a near-future world, caught in the throes of an ambiguous apocalypse, where a woman with everything to hide finds her destiny revealed….

No one thought the apocalypse would be like this. The world didn’t end. And the appearance of seraphs heralded three plagues and a devastating war between the forces of good and evil. Over a hundred years later, the earth has plunged into an ice age, and seraphs and demons fight a never-ending battle while religious strife rages among the surviving humans.

Thorn St. Croix is no ordinary neomage. All the others of her kind, mages who can twist leftover creation energy to their will, were gathered together into Enclaves long ago; and there they live in luxurious confinement, isolated from other humans and exploited for their magic. When her powers nearly drive her insane, she escapes—and now she lives as a fugitive, disguised as a human, channeling her gifts for war into stone-magery and the pacific tasks of jewelry making. But when Thaddeus Bartholomew, a dangerously attractive policeman, shows up on her doorstep and accuses her of kidnapping her ex-husband, she retrieves her weapons and risks revealing her identity to find him. And for Thorn, the punishment for revelation is death….
I've been looking at these books since I walked past a display in the 'World's Biggest Bookshop'. I would walk into the section, read the back and admire the cover, but I kept hesitating because it didn't look like the romance would play such a big part in the book.
Finally, I bought the book and I was right, romance wasn't the driving force behind the story, but there is plenty to keep me glued to the page;D.
Thorn has disguised who she is and her stone mage powers for a decade. When her ex-husband disappears and she becomes the main suspect, Thorn can either run and leave the jewllery store she built with her two best friends behind or investigate on her own and risk being found out. Being an unlicensed Witchy-Woman results in horrific and extended torture, followed by slow death (what can I say, the people of this world are really loving and tolerant).

'Bloodring' had me by the throat from the first page. This post-apocalyptic world Faith Hunter has created is mindblowing. There are some inconsistencies (sugar is rare and expensive but aspirin readily available, the world is in an ice age, major cities are destroyed but the internet still works), but I didn't notice any of that because I was so caught up in the action, creatures and characters.

Thorn is the narrator and she has a wicked sense of humour. Her self-depeciating sarcasm made me laugh out loud more than once. When her powers came online as a teenager, she could suddenly hear the thoughts of every single mage around her; she had to leave her home or go mad. Now, following the clues searching for her ex-husband Lucas, Thorn discovers that Darkness is once again rising in Mineral City and that there may be far more involved than just the kidnapping of one human. And her being here at this point in time may not be an accident.

I really enjoyed the way Hunter describes Thorn using stones and crystals for her magic, the way she mixes fact with fiction. It always felt smoothly weaved into the story and appropriate for the situation. You were never quite sure what would happen next.

Thorn's investigation kept me on the edge of my seat, twisting and turning in directions I did not see coming. Sometimes it became a little too complicated and just one creature too many, but overall, I found the story new and different and Hunter's charaters well developed and intriguing. 'Bloodring' is the first book in a series and I went right back to the store to buy 'Seraphs' and 'Host' and I now cannot wait for the next book in the series.

'Bloodring' is post-apocalyptic fantasy with a certain amount of violence, is published by Roc and Faith Hunter's website can be found here.
Who wrote this? Tina at 2:44 am

This sounded good just by looking at the cover alone - with your review its zoomed to my wishlist! Thank you.

Okay, you tempted me, but I ordered 'Hosts' as that seems to be first in the series

I haven't been able to get into this one. I think I don't like Hunter's writing or something.

But I may try this again -- it's currently DNFed in my spreadsheet -- because it's you, dear Liz, and you liked it. ;)

I have become a big fan of Faith's because of these books. Bloodring is the first of the series, Rachel, followed by Seraphs and then Hosts.

Thanks Tina for reviewing this one - I've got all three on my shelves, waiting to be re-read!

Yunaleska, it was the cover that made me look at the book again and again.
Liz, how could you have known about Faith Hunter and not share her brilliance with me? Here I thought I've discovered somebody new. *pout* Have you tried her Skinwalker series yet>

Hello, My name's Vera. I'm from Brazil. I've just finished reading the book. I didn't understand what happened to Lucas and Audric. Could you help me on this? Cheers.