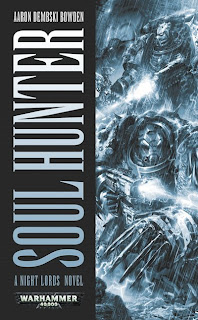 Betrayed, cast from the Emperor's light and hunted as heretics, they are the rebels of the 41st milenniun. Garbed in symbols of death, the Night Lords are remorseless hunters and killers. They will never repent for the blasphemies that saw them banished, They prey upon the dying Imperium, bringing death from the darkness between worlds.

And terror is their most powerful weapon.

Soul Hunter poses an interesting situation- a Space Marine legion that has sided with the traitorous forces of the chaos Warmaster, not out of allegiance to any warp spawned powers or the Warmaster himself, but on the back of a murderous betrayal by the emperor himself. Insular and fixated on exacting their vengeance, the Night Lords have waged their war against the Imperium since the assault on terra 10,000 years ago. But their insular stance has weakened them; with no world to call home, their infrastructure is steadily collapsing, their numbers dwindling with little or no chance of reinforcement. The attrition of their war against the Imperium spells doom for them, yet what choice do they have?

Soul Hunter follows the events surrounding Talos, the titular Soul Hunter, known as a prophet amongst his peers, as they are drawn into Abaddon’s daring gambit to plunder one of the Mechanicum’s forge worlds.

Aaron takes his time setting the stage for the fireworks which follow, carefully building up the character of Talos and feeding the history of this non mainstream legion through in carefully constructed pieces, so that by the time the combat explodes across the pages, Talos has become a complex character, far more than the first impressions given of him. Similarly, the Night Lords have been given a long overdue shot in the arm, setting them up as an enigma amongst the Warmaster’s cohorts, and while the same attention isn’t lavished on the cast of supporting characters, they’re more than just red shirts, the switches to their perspectives more than mere fuel for the story’s engine.

After his dab handling of the combat in Cadian Blood, I expected nothing less than sheer mayhem from Aaron now that he’d been given Space Marines to play with, and large calibre carnage is what he delivers. There are some great sequences- one that really lit up the pages for me was his handling of the ship to ship combat in the void. Bearing in mind the ponderous nature of void combat, with ships duelling over thousands of kilometres, undertaking complex manoeuvres over a space of hours, the vivid tension and energy he infused these with were exhilarating. And as for the hunt in the basement of the prison complex... awesome.

If this is the calibre of goods we can expect from Aaron, someone needs to chain him to his writing desk! More sir, more!
Who wrote this? Mark at 9:00 am

I read this book in a matter of days, an please poeple i warn DONT read it unless you are willing to collect a Night Lords army once you finished the book. it is amazing, and the author has brought this legion to life. The book has some amazing combat scene's, but it is also a very sad book an you can feel the sadness and depression that the legion feels also