The Genesis Secret by Tom Knox 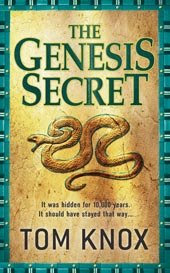 In the sunburnt deserts of eastern Turkey, archaeologists are unearthing a stone temple, the world's most ancient building. When Journalist Rob Luttrell is sent to report on the dig, he is intrigued to learn that someone deliberately buried the site 10,000 years ago. Why? Meanwhile, in London, a bizarre attack is baffling the police. When a weird killing takes place on the Isle of Man, followed by another in rural Dorset, DC Mark Forrester begins to discern a curious pattern in these apparently random murders. What weaves together these two stories is the Genesis Secret: a revelation so shocking it may threaten the social structure of the world. Only one man knows the secret, and he is intent on destroying the evidence before it can be uncovered. Spanning the globe from the ruined castles of Ireland to the desolate wastes of Kurdistan, Tom Knox's intense and compelling thriller weaves together genuine historical evidence, scientific insights and Biblical mysteries into an electrifying tale that grips the reader mercilessly from beginning to end.


*witness my little dance of joy* - in fact, if you were in the WHSmith’s at Charing Cross on Saturday evening, you would have seen me do a bit of a dance of joy when I discovered this book! I then politely paid for my book and left swiftly, in case I got tossed in jail for lewd behaviour.

I adore – as everyone who reads this blog should know by now – quest, thriller and adventure novels. Man, they can be rubbish and kitch and pulpy and I’ll still devour them with a relish. I won’t even say they are my secret shame because, ya’know, I tell everyone about them!

When I saw The Genesis Secret winking at me on the shelf, I snatched it up, saw how very pretty the cover was...and what immediately struck me was: no cover quotes from other authors in the genre and no newspaper quotes. I was immediately sold – 150%. I appreciated the fact that the publishers expected the book to sell on cover and book title alone. I loved that. I read the write-up on the back and had to have it even more.

I started reading it on the train. And went ice cold after I read the first few pages.

Do you believe in serendipity or even synchronicity? I definitely do.

A few months ago I spotted an article on my RSS feed from http://www.archaeology.org/ about a temple uncovered in Turkey. I read the article and fell in lust with the adventure of it, but I didn’t think about it any further than that. Then Mark asked me last week if I had heard about this place in Turkey called Gobekli Tepe and I had to say no, until he sent me this link to the Smithsonian website - and I realised that I did. It was all part of the same thing!

I digress: back to The Genesis Secret – it is all about Gobekli Tepe and the mystery surrounding this fascinating place. A sacred place, no doubt, which had been buried. Older than the pyramids and Stonehenge, its existence doesn’t make sense, at all.

Tom Knox, pseudonym for Sean Thomas, journalist and all-round good guy, has pulled out all the stops in The Genesis Secret when it comes to action, entertainment, twists and turns. The novel is a strong example of what makes action adventure worthwhile reading – like David Gibbons’ work, The Genesis Secret is not just well researched, but anchored very much in what is currently happening in archaeology and the world at present. It also helps to bear in mind that the author spent some time at Gobekli Tepe and his main character is a journalist. So, he had a good solid background in both instances and he does not disappoint when it comes to spinning a good yarn.

The main character, Rob Luttrell is a nice guy. Maybe a little too nice and a little too trusting. He gets sent to Turkey on a nice easy assignment by his editor to cover an interesting snippet about a new temple discovered.

Once Rob arrives at Gobekli Tepe he is struck by the strangeness and the beauty of the place. With the help of a young female French archaeologist called Christine Rob tries to puzzle out the secret of the place, the acts of violence against the leading archaeologist and he tries to figure out the significance the site has to various religions from the area, one of which is akin to Satanism.

Back in Blighty, bad things are happening to random people. A murderous gang butchers their way across various historical sites and it is up to DC Mark Forrester to find out why. Personally, I liked Mark Forrester more as a character than I did Rob. Both characters are normal guys, taken outside of their comfort zones, and pushed up against something truly nasty and it is a case of sink or swim. Both of them do admirably well. But it is Mark’s solid strong and methodical character that made me like him a lot – he was happy to look at the evidence but not be blinded by what they represent.

There are twists, turns, revelations and reveals aplenty in The Genesis Secret. Some, I think, once the ball truly gets rolling, can cause a lot of upset in various religious quarters. But then, the point is: it is fiction and conjecture, based on what has been found and the author's ability to plait it all together in a gripping yarn. There is also some very solid research. In fact, the storyline is not something I’ve come across before and it was such good fun to read something that had not been done before and rehashed by a hundred authors since (Jesus, The Holy Blood, Mary Magdalene – you know, the usual…). And I’m hoping that there will be more adventures from Tom Knox, nee Sean Thomas, featuring Rob Luttrell and Mark Forrester.

Find the excellent website of the Genesis Secret here but be warned – unless you’ve read the book do not go past the About The Book pages because there are a lot of spoilers and Tom/Sean says so himself, so be warned.
Who wrote this? Liz at 10:48 am

Sounds a bit like The Alexander Cipher and it sounds just as good (or better). I've never beena huge fan of the genre, but of those titles I've read, I've always been happy when I finish the book. Might save this one for the summer as a beach read.

I reckon I must be one of the few who hasn't read The DiVinci Code yet ... let alone other thrillers of this subgenre. It just never seemed to grab me, even though I get intrigued by conspiracy theories in general.

Yet, this one sounds above par. I won't read the rest of the website as I think this one may end up on the shelf!

Interesting review ... even though you had some hebejeebies :o)