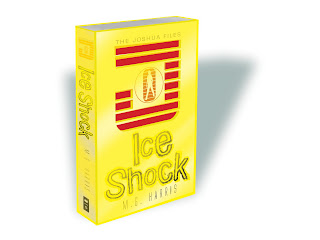 Josh thought the worst was over - but it hasn't even started...

Josh is even more certain now that his father's death was no accident - and he's starting to wonder if he can really trust his closest allies. When he learns of a secret buried within the Ix Codex, he must journey back to the secret Mexican city of Ek Naab. Shocking news awaits him about the mysterious Bracelet of Itzamna. Did Josh's dad really take it? And where is it now? Josh has no idea what's waiting for him...

If I was a raving bunny after reading and reviewing the first Joshua Files - Invisible City - well, colour me bright yellow (to match the sleeve for Ice Shock) and now call me Raving Rabbit.

Whereas I thoroughly enjoyed Invisible City and had a mini-crush on Joshua, MG Harris' new offering, Ice Shock, has stepped up the character development, storyline, plot exploration and the all out adventure to Ridley Scott levels.

Joshua thinks that things have quietened down after his adventures in Ek Naab - he almost has his life back to normal. His mother is a ghost of her former self - the conversations they have are stilted and unhappy, trailing off with either one of them leaving the room. She is still struggling to come to grips with the death of his father. Joshua still isn't convinced that things are as explained as they could be. He wants closure, actual answers and he's happy to push the boundaries to make sure he gets them.

He has also not stayed as close to Tyler and Ollie as he wanted to - they still regard him with a bit of suspicion as he left them behind whilst he went off to search for answers on his own in the jungle.

Now, here I confess utterly that I suspected both Tyler and Ollie from the start as being double agents. I suspected one more than the other but boy, was I taken aback in Ice Shock when the real traitor stood up! And boy was it a carefully planned and plotted - in that respect, I loved the reveal scene because the protagonist was pretty scary but once you met his follower (the traitor!) and you realised the level of that person's delusion, you can't help but empathise with Josh even more.

The story mostly takes place in and around Mexico with brief stop-overs in Oxford. I love the richness of the culture which MG Harris is so deft at adding to the storyline without deviating from the action and the characters. Joshua grows tremendously in this novel as a person - he has to face that one of the people whom he held as a confidant has betrayed him to the enemy, he finds out that if he isn't careful, the group of lunatics keen to destroy Ek Naab, are looking for him specifically as you know, it will be a good way to get hold of a test subject in order to try out some fun procedures to test his resistance to certain illnesses and see if he has any further gifts...not pleasant, at all.

But, being Joshua, he only knows one gear: and that is forward.

With the help of Ixchel (whom Joshua is supposed to be marry one day...or not!) Joshua has to face up to who he is, his own destiny and that maybe, just maybe, what he has been told about Ek Naab, may not be all of the truth. It raises questions of trust, belief in yourself and the levels of belief in your friends and family and how far you are prepared to go to find what you seek.

I can say a lot more about the novel, the set pieces which are very good and the final action sequence which is just completely inspired. But I won't because you know, I trust you guys to take my word when I say: excellent read and worthy of a best buy tick.

Ice Shock is a multi-layered plot and it is very well written. For those who are after action and adventure and puzzles to solve, this is an excellent novel. For those who want to dig deeper into a developing character and follow him through twists and turns, this is for you too. Whilst travelling in an exotic locale, no less!

I didn't think that there could be more twists and turns, but MG Harris said on Thursday evening at the Scholastic Author Event, that we have to bear in mind that this is the second of a five book series. A lot more will be happening! We have to realise that the bad guy we have seen in Book 1 and Book 2, is an underling, the real baddy hasn't even shown up yet to confront our hero!

The mind boggles! And the heart waits impatiently. Find MG Harris' site here and the official Joshua Files website here.
Who wrote this? Liz at 3:59 pm

It sounds as wonderful as I expected it would be! Great review - thanks.