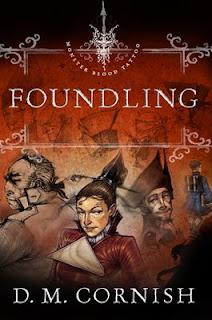 Set in the world of the Half-Continent- a land of tri-corner hats and flintlock pistols-the Monster Blood Tattoo trilogy is a world of predatory monsters, chemical potions and surgically altered people. Foundling begins the journey of Rossamund, a boy with a girl's name, who is just about to begin a dangerous life in the service of the Emperor. What starts as a simple journey is threatened by encounters with monsters-and people, who may be worse. Learning who to trust and who to fear is neither easy nor without its perils, and Rossamund must choose his path carefully.

Complete with appendices, maps, illustrations, and a glossary, Monster Blood Tattoo grabs readers from the first sentence and immerses them in an entirely original fantasy world with its own language and lore.

It has been a long old time since I felt so immersed in a story - in fact, it was probably when I fell for Lira's story in Philip Pullman's His Dark Materials Trilogy all those years ago... There is something utterly magical about Foundling by D M Cornish. It's the whole package, I think - the story, Rossamund's shiny character, the action, the adventure, the language, the monsters (!) and this entire world Mr. Cornish has created.

Rossamund Bookchild has grown up as an orphan (foundling) at Madam Opera's Estimable Maritime Society for Foundling Boys and Girls. His life has not been one of luxury, to say the least, but he has been fortunate enough to have made friends during his stay there. Rossamund realises that he has to leave Madam Opera's and has his heart set on becoming a sailor, so when he is chosen to become a lamplighter instead - soldiers who protect the Empire's roads from all evil - he is only half disheartened. At least he will still be adventuring! But for someone as innocent and naive as Rossamund, it spells trouble!

Foundling follows Rossamund's journey as he travels the Half Continent to the lamplighter's HQ. The journey is pretty dangerous - even for hardy seasoned adults, travelling in a group, never mind for a young boy travelling on his own, especially a boy who has never left the town he's grown up in.

What I enjoyed about Foundling is how Rossamund goes from someone who is scared of monsters and who has lived a very sheltered life, to someone who can feel empathy for a slain monster. Although, in their society, feeling anything but dislike towards monsters, is akin to social suicide and will no doubt be followed by a swift death. The image I have of the world is harsh - probably close to being an incarnation of an early industrial era. There are thieves, robbers, scary monsters, enhanced humans (humans who have extra glands inserted into their bodies, making them faster, stronger, capable of fighting creatures and defending the human race) - but then there are also kind and gentle people who are sharply juxtaposed against a backdrop where you realise that monsters aren't just the ones who LOOK like monsters, the ones who like you and I are sometimes even scarier.

Rossamund's journey is wonderfully told - the language is elegant and almost antique sounding with almost-familiar names culled from words we would recognise as being Germanic or Dutch. One item that I found only lightly jarring at first, but then became used to, is some of the character's dialogue - the colloquial speech of some of the other characters was really hard to get into and felt a bit jarring, detracting only slightly from the story - but then, I understand exactly why it was done, giving you an example of how the people from the different regions within the Half Continent spoke the same language, but with it's own "accent" for a lack of a better word.

I am really looking forward to reading more about Rossamund - his character is so sweet and it would appear that there is more to this little boy with the girl's name, than meets the eye. The other characters who make their appearances - either villain (monster/human) or hero (monster/human), brings a little bit of magic to the story.

Importantly, I think everyone should visit the author's website because, like Gillian Philip's site, it is just too cool for words. Find the link here. Many thanks to Penguin USA for sending a copy of this amazing book out to me. It is a treasure to read and I am really pleased that I got the chance to spread the word about D M Cornish and Rossamund! D M Cornish has also been published here in the UK (by David Fickling Books, part of Random House) and both Foundling and it's follow-up novel, Lamplighter are available to purchase.
Who wrote this? Liz at 11:38 am

I just started this book this am. Hope I like it as much as you did :)

When I first heard about this series years ago I thought it sounded interesting. After all, how can you beat tri-corner hats? Somewhere in the shuffle of life I lost the link and stopped getting updates. but now I'm hearing more and more about the series again, so I think I'll need to see if I can borrow a copy.