Thursday night Mark and I and our friend Kaz Mahoney pulled outselves together to go and meet the legend that is Raymond E Feist at Forbidden Planet in London.

It was amazing - he is a lovely erudite gentleman with a lovely speaking voice and a keen sense of humour - he shushed us a few times after we got our various books signed by him - we were standing chatting to the lovely Danie Ware from FP - BUT he did it with good humour and told several funny stories. There were many fans, some of whom clearly met him in the past.

Here's a pic of him signing a nice chaps proof copies. 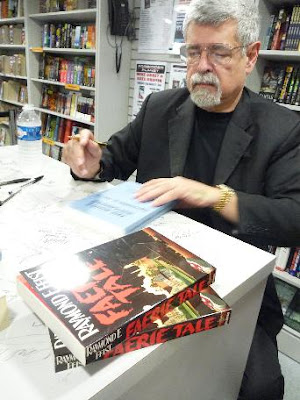 He also posed with Mark but I shook too much to take a decent photo - so although you could tell it was Mark and it was Mr. Raymond E Feist, they all look a bit blurry. So, apologies for that!

This week has also been a very busy week at work. The only thing that kept me going insane was knowing I had parcels waiting for me at our neighbour, Ray. Our postie knows the drill and drops all our parcels with him. Cool, isn't it? In return we make sure the postie is supplied with wine and chocolate during the year - this keeps him happy lugging all those parcels around. And his wife thinks he's very thoughtful...


Anyway, here's a pic of a selection of the books we received this past week. 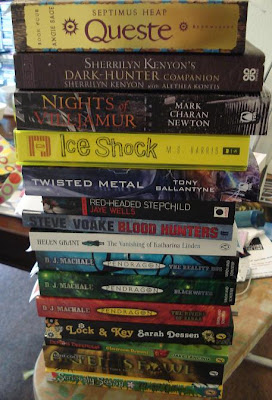 An exceedingly choice selection of books. I've already started on two of them. *beams*

I have two very hearty recommendations on books I've recently read - one review I can't post as yet as it is not yet published for a few looooong weeks yet but trust me when I say this, it's going to be big and it is going to rock your socks, especially if you are a fan of young adult urban fantasy.

The book is called Devil's Kiss by Sarwat Chadda. I'm not saying a single thing more except for: make a note, pre-order it and read it. Or, stick around till closer the time, in May, when it's released and I'll be running an interview and a competition to win copies of it. Made a note in your diary.

Secondly, lie, cheat, buy or steal yourself a copy of the newest Felix Castor novel, Thicker than Water by Mike Carey. It is mindblowing. A non-stop actioner in which Fix comes up against a big bad, that makes even his demon-mate Juliette think twice. The review should be up early next week.

Today I got myself wiped out by the mother of all migraines. I've had several of them now, quite badly, these past few weeks. Having said that, today has also been an incredibly productive day writing-wise. I popped enough pills to fell an elephant and by midday I could actually make sense of what was going on around me. I had a burning need to write. And I did. 2000 words, people! My little piece of WIP which I am studiously working on, grew by 2k. I am very proud. I even re-read some of it and it all makes sense! I then went back upstairs to recharge and slept till five. If you were wondering where Mark was, well, he took himself off to the misty beaches of Kent looong before sunrise today and went fishing. He came home at around three with some lovely little pieces of fish. I'd show you the pics but I'm not all that into showing dead things on the blog.

So, watch out for a few upcoming reviews in the next few days. A lot of young adult stuff, a bit of fantasy (okay, maybe a lot) and some fab literary stuff too. Oh, and comps.

Thanks, Liz! Glad you came down - and Raymond E was an anecdotal master *grins!*

Ooo! You have Redheaded Stepchild by Jaye Wells! I've got that up at the top of my To Buy List.

Glad you had a good week and lots of good books! I'm getting Lock and Key this week and I can't wait for it =)

Ooh, you got Katharina Linden. Is that the finished copy? I have a proof, but haven't read it yet. I also have Devil's Kiss, but am waiting until nearer publication date to read it. I'm glad it's good!