Crossing the Line by Gillian Philip 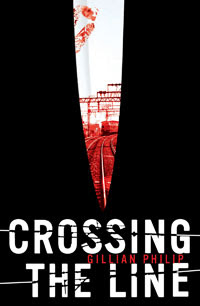 Nick Geddes is the loneliest thug in school, but that’s not entirely his own fault. True, he should never have thrown in his lot with the homicidal Kev Naughton in the first place, but he's trying to live down his past.

It isn’t his fault his mother is a New Age hippy chick with a mortifying god-slot on local radio; as far as he knows it isn't him who drives his father to drink. Nick isn’t the one who hangs out shoplifting with an imaginary friend: that’s his deranged sister Allie.

Worst of all, the girl he loves hates him with a passion, and that's understandable. But it wasn't Nick who stabbed Orla Mahon's brother to death with a kitchen knife...

Firstly, let me tell you what this novel isn't about: Crossing the Line isn't about the action act, or knife crime (which is so much the topic these days in the newspapers and on TV), it isn't about making excuses, it isn't about gangs, it isn't about gratuitous violence - instead it is about what went before and what came after and how a stupid pointless act committed by a scared boy trying to save face created a whole world of problems for those left behind.

Beautifully written from Nick's point of view, the story skips backwards and forwards, telling the story of his sister Allie, his own involvement in a gang of bullies and how he walked away from that, to his own detriment and that of his sister. It tells the story of Allie's strangeness and how she fell in love with Aidan and how, after his murder, she's conjured him to be her imaginary friend. Nick's parents are not emotionally equipped to deal with his problems, or his sister's as she seems to be going off the rails and definitely not his nan's rapid decline.

In other words, Nick has a lot going on. And for all his surly ways, he is immensely likeable. His character is handled with ease and his emotions are explored with great sensitivity. There is also a lot of humour, some black, some wry and some laugh out loud funny. It takes a very talented author to broach a topic such as knife crime and tell it from the point of view of one of the perceived baddies.

The novel is very easy to read. My favourite character through all of this is Allie - with her strange ways and imaginary boyfriend by her side. There is something so vulnerable about her character that I fell for her hook line and sinker. It doesn't mean that she's annoying or wimpy - she's just tougher in other ways than Nick - where he is all muscle and brawn and scowls his way through school and conversations, she's quiet, quick and maybe a bit manipulative.

I thought that Nick's character could have gone badly wrong - he could have been a truly unlikeable character, one that you do not have any empathy for and somehow resent reading about. Instead his motivations are explained with great care and you can see where he comes from and why he acts the way he does. A very good creation and to be honest, it was like having a window into the head of some of the surly kids I see hanging around our local offie.

Crossing the Line is an excellent read for ages of 11+. I did some searching and found the author, Gillian Philip's very cool looking website here. It's fantastic to see how much work she currently has on. Crossing the Line is published by Bloomsbury and will be available during the first week of April.
Who wrote this? Liz at 9:38 am

I really liked this too. I like the subject matter of knife crime, and the character of Allie (like you!). She was great to read about.

It just shows how one stupid mistake can ruin many lives. Great review!

Fascinating review - I really enjoyed reading it. Thanks!

It is just such a brilliant book - I was hesitant, thinking it was going to be melancholy but the sense of humour is just perfectly pitched.

I am looking forward to seeing how well this does.

It's a brilliant book and deserves to do well. It should be winning prizes, but then, that's true of the previous one of hers I read, Bad Faith. This is sensitive, sustained, compassionate, entertaining writing - the work of a real professional.

Great book and an important book. A real page turner with a contemporary sharp focus - is longlisted for the Carnegie so here's hoping it makes the shortlist!