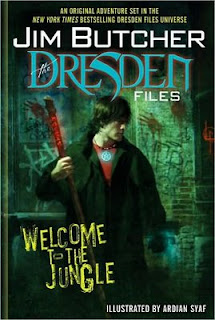 When the supernatural world spins out of control, when the police can’t handle what goes bump in the night, when monsters come screaming out of nightmares and into the mean streets, there’s just one man to call: Harry Dresden, the only professional wizard in the Chicago phone book. A police consultant and private investigator, Dresden has to walk the dangerous line between the world of night and the light of day.

Now Harry Dresden is investigating a brutal mauling at the Lincoln Park Zoo that has left a security guard dead and many questions unanswered. As an investigator of the supernatural, he senses that there’s more to this case than a simple animal attack, and as Dresden searches for clues to figure out who is really behind the crime, he finds himself next on the victim list, and being hunted by creatures that won’t leave much more than a stain if they catch him.

First and foremost, let me say thank you to the chaps at Dabel and Random House US for sending me a copy of this to review. Needless to say I was ontop of the world and over the moon when it arrived earlier this week.

I am a huge graphic novels geek but I am very much aware that I am still lacking in my geek-education. This however does not detract me from picking up these glossy little treasures and reading them to bits.

As a fan of Jim Butcher's work (yes, even the TV show, The Dresden Files) when I found out that Dabel were going to be doing graphic novels of his stories, I was - along with the rest of the JB-Fandom - very excited. And it is justified - we have not been let down.

Welcome to the Jungle is expressly written for Dabel by Jim, with a foreword by him. It made me grin reading it as you can really tell that JB is a total fan-boy at heart, no matter how well his novels sell and how famous he is!

Welcome to the Jungle is set in modern Chicago. The story is wonderfully illustrated by a very adept Ardian Syaf, capturing the nuance of the storyline with the slightly deeper darker shadows and the effective use of "show not tell" imagery. He captures Harry and Murphy in an unfussy way, bringing movement to their actions. An excellent artist and very well chosen by the chaps at Dabel.

We follow Harry as he's called in by Murphy, to investigate the weird happenings at the zoo, in his on-off capacity as consultant for the police. Everyone else seems very happy to turn their back on the strangeness of the attack and to say: "the monkey did it". But, of course, this is not the case. It never is. Especially not where Harry's concerned.

As a pointer, this story takes place just after the first novel "Stormfront" and if read it as that, you immediately notice the tension between Murphy and Harry - Murphy is still a bit unsure and wary of Harry and his abilities whilst defending him to her colleagues. They are friends, but it is as if she is hovering on the brink to take his word as the truth or to toss him in jail for obstructing the investigation. The few pages in which Murphy appears is revelatory - her scowl is prominent, as is her negative body language - it is one of defense and almost annoyance. In this instance you cannot fault Mr. Sayef in his drawing of her. He captures her hesitancy as she hovers over the crime scene with tremendous ease.

Back to the story: Harry, being Harry, gets lumbered with a damsel in distress, then gets in over his head and has to desperately figure out exactly why wild animals are becoming possessed and chasing him and the damsel and more people are killed! Of course Bob is there, as leery and informative as ever. The depiction of Mister is hilarious and well, the story works - it works because Jim has cared enough about Harry to give him an "aside" adventure, something new, something which the Dresden Files fans did not know. It is an interesting aside as there is a bit of character development thrown in for good measure and it is a vehicle to show off the evolving relationship Harry has with Murphy and how things can go pearshaped, so very quickly.

It is a very good read - if I listen to my friend Kaz Mahoney and I attribute stars to the books I review, I'm here giving it ten out of ten stars or five out of five. Welcome to the Jungle gets that extra star for the concept art in the back - it is wonderful stuff and really worthwhile picking it up if you are a Dresden fan or even, if you've never heard of Harry Dresden or his wizarding prowess and you are in the mood to own a four in one graphic novel with some amazing artwork, you cannot go wrong picking up a copy of this.

Find the Dabel Brothers website here. If you look through their site, there are some illustrated pages of Welcome To the Jungle that will no doubt wet your appetite for more.
Who wrote this? Liz at 9:46 am