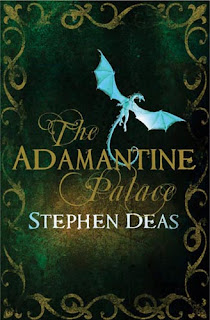 I very briefly met Stephen Deas at Mr. David Devereux's book launch a few months ago here in London. We maybe spoke for all of two minutes but I was struck by how nervous he seemed about speaking about his upcoming novel, The Adamantine Palace, published by Gollancz in the UK. Having said that, he was incredibly nice and probably overwhelmed by the group of shrieking people (me, Kaz, Mark, Jaine Fenn, Alex Bell and Suzanne McLeod) we were at the time, so I don't blame him at all for beating a hasty retreat to the back to speak to Jon and Simon from Gollancz.
When I spoke to Suzanne about his apparent shyness and how excited I was about The Adamantine Palace, she firmly but gently said that it is a very odd time for an author - he is being published, there is hype about the book, but he can't actually talk about it, because it's not been published as yet. And she reminded me that it can be overwhelming because you go from being a member of the public to one of the "in crowd" and so it is a bit of a change and something to get used to. Upon reflection I realised that it made complete sense and I felt that when the day came, I wanted to do a bit of splash on MFB because you know, debut novelists deserve it and also, in a way, to apologise to Stephen D for coming across a bit "heavy" before his publication and assured star-dom.
I've just visited Stephen's LJ site and decided that it is today that warrants an all-out shout-out.
It is his debut today - The Adamantine Palace is officially released today. So, a massive congratulations to Stephen and the team at Gollancz.
On his LJ Stephen mentions the split of opinions between reviewers who had already read it - some love it, some don't. But, and this is where I've had several conversations in the past with publishers, authors and agents: in my mind the reviewers CHOSE to review the book. They picked it up, from their tottering piles of TBR stacks and they CHOSE to review The Adamantine Palace because something about it drew their attention. So, in that respect, it is already winning. And it is generating conversation and interest. So it's going to be interesting to see how it progesses. I will be buying a copy on my return from Malta to read and will definitely review it because, you know, it has Dragons!
Stephen will be appearing at Eastercon (which Mark and I will also be attending) so make sure you get your copies signed if you are around. This is the link to his website and this is the one to his LJ.
Who wrote this? Liz at 11:49 am

Thank you, Liz. That quite well sums up what it's like. You can add a natural reluctance to blow my own trumpet about anything.

But I'll blow a trumpet about my dragons. The dragons kick ass. Think of The Adamantine Palace as a thriller as much as a fantasy and if that still appeals, I think you'll enjoy it.