Watching The Watchmen - A Musing 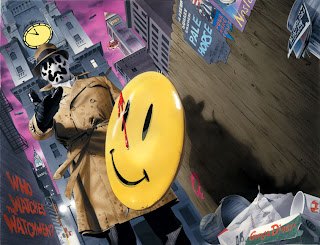 Mark and I pootled off to the big Imax in Greenwich on Saturday to go and watch The Watchmen.

*Confession* - even with all the hype, I had no idea what the movie was about. I knew some of the character's names and such, but seriously, I had no idea about the mythology, the storyline, anything. I was literally going along to look at pretty pictures.

And therefore I think I am quite lucky - I went in not expecting the graphic novel to be retold. I had no preconceptions, except that it should be good.

And it was. To a certain extent. I felt it was a bit too long. Some scenes could have been shortened / deleted altogether. Visually, it is stunning. None of the characters are as well definined for me as Rorsach - I totally 150% got him (not entirely sure what that says about me) but then I also quite liked the way Ozymandias was portrayed and the actor who played him did really well to reflect his perceived arrogance and grandiose schemes.

I'm not going to get into a whole in-depth discussion on the many avenues The Watchmen opens up in its quest for answers. It is a very adult graphic novel movie - not necessarily for the violence and the sex, which in itself is filmed really well - as it makes you sit back and think and appreciate the era it had been written in and also how, even today, it highlights the horrors we see happening on our television screens (no, I don't mean Simon Cowell or the odious Demons or Merlyn tv shows) daily, and it leaves you wondering about the future.

It certainly isn't my favourite movie of all time, that's for sure, but it is a good flick nonetheless and definitely one we will get for the dvd collection as I'm pretty sure there is just so much that you miss the first time around. Go and see it, but don't expect a brainless Summer holiday movie - you may be surprised by how much it makes you think.
Who wrote this? Liz at 9:12 am

Email ThisBlogThis!Share to TwitterShare to FacebookShare to Pinterest
Labels: the watchmen

Two days to go until I go to cinema and watch WATCHMEN.

I read the graphic novel before and I know they changed the end.