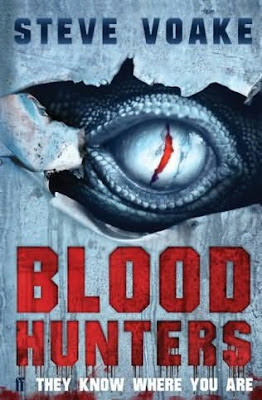 In the middle of the Mexican jungle a small scientific team prepare to embark on an exploration of the world’s deepest sinkhole; a naturally-formed underwater shaft that no one has ever reached the bottom of. What they are about to discover could change the world forever.

Three thousand miles away, Joe McDonald’s father is arrested for murder. Joe and his friend Giles are desperate to prove his innocence, but when more people are attacked in mysterious circumstances, Joe begins to suspect that a predator is on the loose. Maybe the dark shapes he has seen in the woods and canal aren’t just his imagination. Could the attacks in Joe’s town be linked to his dad’s research at the university? Could Dad’s colleague have brought something back with him from the expedition in Mexico?

Suddenly the search for justice becomes a desperate fight for survival…

I am not entirely keen on books with dinosaurs on the cover or of wild crazed eyes staring at me. It makes me feel...watched, which is probably the idea, so when Blood Hunters arrived in the post I wasn't entirely sure if I was going to give it a go. I was thinking of maybe slipping it into Mark's bag to read...but then I read the back and I thought I had to give it a try. Go Team Liz!

In twenty words or lessL it is a mix of Michael Crichton and Stephen King at their best. It is bloody terrifying.

I am paranoid enough about bugs and flying things and have a relative fondness for reptillians because, you know, they've had a tough time of it. But Blood Hunters has changed that. Now I am staying clear of all kinds of insects and animals, unless they are cats and dogs. Oh wait, there is that story about Cujo...

I digress. And I apologise. Overall Blood Hunters reads like an excellent script for an episode of Primevil . Only thing is, instead of a bunch of scientists trying to figure out what the hell happened, we have two very likeable teens, Joe and Giles and they do a remarkable job of putting the pieces together. But, of course, how do you get adults to pay attention once you've figured it out and at best, the story sounds like a hoax?

The action is fast paced and thrilling - none of the characters walk away unscathed after several attacks by these mysterious creatures. There is gore and muck aplenty and like all good novels, there are twists and turns and a false ending which had me go "what the hell!?!" as I neared the end of the novel and discovered that it wasn't all sunshine and roses and that there was MORE to come. And THEN the ending.

A very interesting novel, making you think about the bigger picture - what happens if nature decided to snap back? How do we cope? What do we do? What happens if we are no longer the top predators out there? What happens if we can't run and hide anymore because they will find us and eat us? And it's not aliens or vampires or other mystical creatures, but something from our earth's past? Fascinating stuff. It has just enough science to keep it interesting and enough grown-up input to keep the kids from being solitary heroes.

It is creepy and fantastic and although there was one small section I struggled to suspend my disbelief, it is easy to see past small glitch (boys and their toys, you know?) and I found it a quick fun read - a book boys would definitely enjoy, especially for the "ewww" factor. And girls would like because Joe and Giles sound pretty cute and they are heroic enough saving each other and some cops in the process.

Steve Voake's an old hand at writing good novels for kids, he's written a handful of others: The Dreamwalker's Child, The Web of Fire and The Starlight Conspiracy. I couldn't find his actual site, but there is a very pretty site for The Starlight Conspiracy here. Blood Hunters will only be released in the first week of April by Faber Kids. The date is not far away at all, and I'm pretty sure it will find favour with a good many existing and new fans.
Who wrote this? Liz at 4:13 pm

Loved this book by Steve Voake too, really grabbed me. Going to be so easy to get the kids I work with to read it.