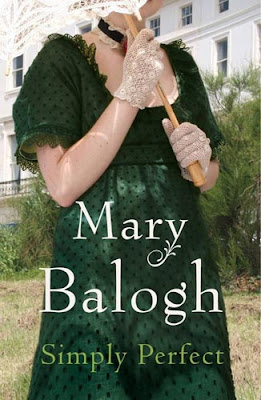 Tall, dark, and exquisitely sensual, Joseph Fawcitt is the epitome of male perfection. Not that Claudia Martin is looking for a lover. Or a husband. As headmistress of Miss Martin’s School for Girls, she long ago resigned herself to a life of spinsterhood - until now.

Irresistibly attracted to Claudia, Joseph embarks on an outrageous plan of seduction. But as heir to a prestigious dukedom, the Marquess of Attingsborough is expected to carry on his family’s legacy, not dishonour it. Yet Joseph is determined to make Claudia his at any cost. Even if that means breaking every rule for a love that is simply perfect…

The synopsis to this novel is tremendously misleading. Firstly, if you thought you were going to read a light chicklit regency romance novel, you are wrong. Very wrong. On the surface it appears all that is above in the synopsis.

In reality, things are a lot more real. The story and characters have a lot of substance and I became entirely smitten with Claudia and the Marquess especially whom I did think, initially, was a bit of a waste of space. Their story is one of a slow friendship developing, one that (as with all good romances) started out as a bit of animosity on Claudia’s behalf. Inexplicably she has an intense dislike for dukes, even dukes-in-waiting, and you don’t find out why, until quite a distance into the story.

I found Claudia refreshing as a female heroine. She had made much of her way on her own, starting her school for girls when she realized that she had something to offer them and tired of having to cater to the whims of those who employed her as a governess. The tutors at the school are all young independent women who are free-thinkers and who clearly like Claudia as both friend and schoolmistress. The girls sound quite a handful and Claudia has a good rapport with them.

She is a kind soul, taking in a large majority of poor young girls to train and teach, giving them a future. The other girls attending the school are all paying students. There is also a mysterious benefactor of the school and as we come to know Claudia, we realize that she feels grateful to the benefactor but she is keen to break his perceived grip on her and the school. She is an independent and does not like answering to anyone for anything.

Joseph comes across initially as a fop, someone so nice and bland you can actually imagine him as being sought after by the mamas for their little girls. He dresses well, he is charming and sweet, thoughtful and kind and actually, I started becoming a bit bored of this male perfection. And he was rubbing up Claudia the wrong way too, he was just too pretty, too sweet and caring. But then, we all have to wear disguises, especially a young duke in waiting and once we scratch the surface we find that he is not as much of a lightweight as we would expect!

And as part of the big reveal, about him, my jaw literally dropped. I expected something to be different about him but I wasn’t sure what. As it turns out, his secret, which he had kept from his parents and his friends and the circles he moved in, is the one thing that does bring him and Claudia much closer together. Their relationship is humourous, charming and genuine. In each other they find a person of mature attitude, who knows what society is all about and they find that they can talk about many things, but then that they can also be quiet, together. It is not a hot and breathless sticky romance from the start, at all. It is slow, deliberate and considerate, which makes their resulting falling in love so much more sweet and satisfying. And funny.

Mary Balogh is a very good writer – keeping your attention on the characters as she weaves the story around them. The plotting is solid, the two main characters are very engaging and I enjoyed my time spent with Claudia and Joseph. I would recommend Simply Perfect as something to consider picking up if you want to read something different – even if you have preconceived ideas about regency romance. This is bound to make you think again! Mary Balogh’s site can be found here and she has several novels published by Piatkus in the UK and is quite well known in the States.
Who wrote this? Liz at 10:56 am

Oooh, I was hooked from the synopsis, but you say it's deep and well-written too? I'm putting this up near the top of my list =)

This sounds amazing! I'm definitely trying it out. Great review!