Thicker than Water by Mike Carey 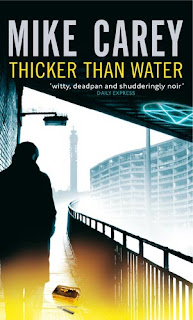 Names and faces he thought he'd left behind in Liverpool resurface in London, bringing Castor far more trouble than he'd anticipated. Childhood memories, family traumas, sins old and new, and a council estate that was meant to be a modern utopia until it turned into something like hell . . . these are just some of the sticks life uses to beat Felix Castor with as things go from bad to worse for London’s favourite freelance exorcist.

See, Castor’s stepped over the line this time, and he knows he’ll have to pay; the only question is: how much? Not the best of times, then, for an unwelcome confrontation with his holier-than-thou brother, Matthew. And just when he thinks things can't possibly get any worse, along comes Father Gwillam and the Anathemata. Oh joy . . .

I finished reading Thicker than Water on the way home Thursday night from the Raymond E Feist signing. I put the book on the seat next to me and exhaled. And realized I had been holding my breath for quite a while.

What a stonking read. No, seriously. There are levels of excellence and this has to be Mike Carey’s best Felix Castor novel, by far. I don’t actually have coherent words to form a proper review, except to say, holy smoke, Batman, I didn’t see that one coming! Well, I expected something but not that!

Shakes head. Okay, so, here’s the review now that I’ve had several cups of tea and managed to process the story in my head and the implications…

The story opens with an Ocean’s Eleven style kidnapping of an inmate of a hospital in South London. And that’s the good part. Well, Mr. Carey allows us to labour under the impression that that is the good part, until he pulls the rug out from under all of us, including Fix and eveyone’s favourite grumpy exorcist is hauled off and interrogated for murder. The item that implicated him in the murder being the words F Castor written in blood in the victim’s blood at the crime scene. And you know, what are the chances that anyone’s going to believe that Fix didn’t do it, especially when it turns out that he knew the victim from growing up in Liverpool and that the victim tried to kill him once, when they were kids…

Fix knows something is wrong with the estate where the murdered party comes from – he senses it as he looks towards it and once he gets there in person, he’s enveloped in its darkness. Something sinister is definitely going on, but what exactly? Why are his old enemies the Anathemata sneaking about the place and what is his brother, a priest, doing there? And why does he look so very guilty and why is he refusing to come clean about what he was up to?

London is a large sprawling metropolis with some very pretty areas and some decidedly ugly places. Mr. Carey takes us on a ride to these not so pretty places as this is where the action takes place and his descriptions lend an air of sincerity to his writing. You know he’s walked these streets he describes and you can almost recognize the places he writes about.

The violence in the novel is pretty brutal – I seriously thought in one section that Fix had bought it. He was going to be d.e.a.d. and will have to exorcise himself. But, he pulls through and then, as it went on a bit, I realized what a sneaky man Mr. Carey is – he’s set up this major incident, almost killing Fix, so that he could make contact with someone rather nice, who will give him a fresh perspective on the case. Very clever, Mr. Author!

The story is a pocket-rocket – it zooms ahead and you have to pay attention to keep abreast of things, as with all the other FC novels. Fix’s character is one that can either grate or you identify with – at the end of the day, he’s just a guy trying to do the best he can in a shitty situation and he just happens to be the one everyone seems to pick on. Having said that, he does himself no favours by being a sarcy and antagonistic git.

The main story within Thicker than Water gets concluded satisfactorily and I heaved a sigh of relief. Although, as much as it concluded, it threw up a few more questions – you know, about religion, the origin of good and bad, angels and demons…the usual noir questions every urban fantasy should ask.

There is a lot more that is due to happen in the forthcoming books. The overall story-arc which started off in book one seems to be heading one way now. Or so it would seem. The end of the novel ends in this blanket of silence and you think to yourself…oh crap, what now?

Thicker than Water is published by Orbit and is out now in all bookshops. Mike Carey will be doing a signing over at FP next week Thursday (26th March) for Thicker than Water and the lovely Kate Griffin will be there too, celebrating her release of Madness of Angels.
Who wrote this? Liz at 5:21 pm