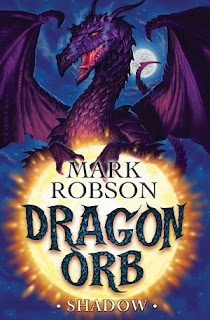 Four dragonriders on a mission to save their world.

Dragon’s in Areth each have a single predestined rider and a single life mission, given to them by the Oracle. But this once all-powerful being is now fatally damaged and fading fast…Only the dragons and their riders can save it!
Shadow the Night Dragon

Pell and his night dragon Shadow must find the dark orb to help save the Oracle, leader of all dragonkind. But Segun, a power-hungry tyrant, stands in their way. Pell must use his flying skills, bravery and resourcefulness to the limit, as Segun is determined to get the orb - even if it means killing the opposition…

I reviewed the first of the Dragon Orb novels, Firestorm back in October 08 and I’ve been waiting (im)patiently to review the newest in the series, Dragon Orb: Shadow. I've read it and I can happily say: it was worth the wait.

One of the first things you notice is that the pace has crept up a bit, when compared to the first novel. The gauntlet has been thrown down and there is a new urgency to the author’s writing as matters are moving swiftly ahead and the baddies are getting in on the action. Kira, Elian and Nolita had gone off in Firestorm to fulfill Nolita’s part of the quest. Pell had decided to go ahead and try and solve his own part of the quest, by himself. And of course, we all know, this is not how quests work. They ask for teamwork, camaraderie with a bit of bickering and some fighting thrown in for good measure.

After some tremendously fancy footwork by the first three comrades, they manage to fulfill Nolita’s prophecy and decide to track down Pell, to help him with his part of the quest. During theirs they had discovered and integral part of the clue to Pell’s part of the quest and they knew he was flying into danger.

Kira is still bossy and a bit annoying but quite sweet, when matters come down to it. Nolita has managed to overcome some of her fears but her obsessive compulsive behavior has become worse. She now has several more rituals that she performs to calm herself and it is lightly and sympathetically touched on in the novel. Elian and Nolita’s roles within the novel are quite small, compared to Kira and Pell’s – they are both very strong, very dominant characters and it is interesting to see how the author plays them off against one another.

We also learn more about the dragons, about their powers and skills. They still – to me – remain quite alien and although you want to like them, there is something that makes me hesitate.

Dragon Orb: Shadow is written as skillfully as the first and moves along at a much greater pace. The baddies are not pleasant and there is an incredibly tense finale in which….ah, but I can’t say, because that would spoil it! You’ve got to read the novel, you see?

Find Mark Robson’s site here and keep an eye out for a Q&A with him in the next few weeks along with a competition. Or two...
Who wrote this? Liz at 3:40 pm