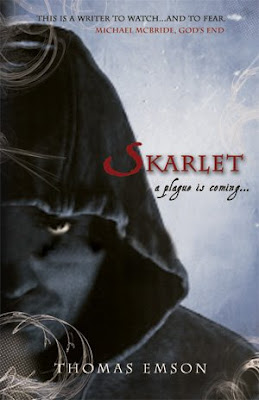 Fear grips London as dozens of clubbers die after taking a sinister new drug. But that's only the beginning. 48 hours later, the dead clubbers wake up - and it's open season on the living, who are butchered for their blood.

Soon, London gives a name to its terror: Vampires.

Jake Lawton, bitter and betrayed after the Iraq War, find himself fighting another battle - against the growing army of immortal hunters and their human cohorts. Lawton joins forces with the journalist who brought about his downfall and the dealer tricked into distributing the drug. And together they take on the spineless authorities, the ruthless cohorts, and the hungry dead.
But the vampire plague unleashed in London is nothing to what lurks beneath the streets -Waiting to be fed . . . Waiting to be resurrected . . . Waiting to reign again over a city of human slaves . . .


I remember vividly how Thomas’ previous novel, Maneater, got under Liz’s skin last year, so when she foolishly took her eyes off the shelf where Skarlet lay, I pounced without hesitation and dragged it off to the sofa.

Firstly, I have to admit that I was a bit hesitant about the vampire angle; my greatest fear was that the potentially groovy antagonists were going to turn out to be angst ridden, pretty Lestat knock-offs that spent their days poncing about and hissing like asthmatic tomcats.

It’s been a while since being wrong has been this much fun. Right from the sucker punch of an opening line, I knew I was going to enjoy this; by chapter 3 I’d have chewed the arms off anyone who tried to take it away from me.

Jake Lawton is a damaged hero, a soldier betrayed by the all too accurately portrayed British media. The chain reaction that follows the first deaths throws him into the path of the blinkered, self-righteous reporter who instigated his ignominious dismissal from the army. Their journey from mutual scorn to grudging co-operation isn’t forced or contrived, and evolves at its own pace throughout, without eroding what defines them.

The writing is tight and reads effortlessly; the chapters are short and sharp, accentuating the pace of the story.

The premise behind the rise of the vampires is fresh and clever, and with this established and pieces of the backstory falling into place, the suspension of disbelief can be all but taken out of the equation, leaving you to enjoy the bloodthirsty rampage that Thomas has unleashed on a well researched London.

And it most certainly is bloodthirsty in every meaning of the word. These vampires are uncompromisingly vicious bastards, with a palpable thirst for blood - and not a cravat in sight. There’s no hiding from the tide of violence that surrounds a horde of these unleashed killers and the lengths their creators will go to in order to realise their vision. Thomas gets bonus points for an unflinching portrayal of the toll this exacts on those unfortunate enough to be engulfed in that tide.

Skarlet is a crimson delight. A gripping,action rich adventure thriller that breathes new life into the vampire mythos.
It's the first book of The Vampire Trinity, and I can’t wait for the next instalment!

Just been loaned this one ... and told it's no-holds-barred, and bloody brilliant (literally).

Looking forward to this one even more now!